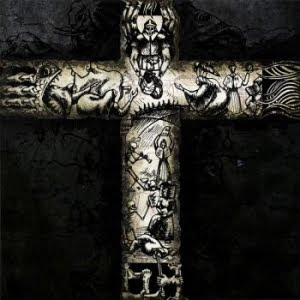 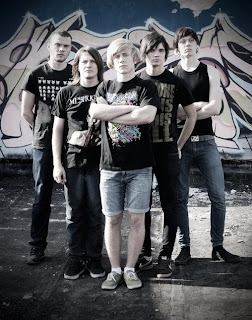 I wasn't really sure whether or not I was going to cover this when I was sent it because it really didn't look like something I would be interested in. I'm sorry, but I will and have judged bands baised on how they look in a photo, and these guys looked like a -core band. But I decided to give it a chance to see if maybe it was worth while.
This is a very interesting sounding record. I come straight out and say that it's a lot better than I expected it to be, proving once again that judging a band based on imagine is an amateurish mistake. It's sounds a lot more like a rock, math rock mind you, record than a metal record, which for all I know may have been intentional, but it certainly isn't all that heavy. The musicianship is well done, I have to commend these guys because they clearly love groups like Converge and The Dillinger Escape Plan, as they make use of quite a bit of dissonant riffs, jazzy interludes, and punkish fury. The instrumental, The End of The Road to Golgotha II - Beginning, really showcases a little bit of everything these guys can do. There's also a little bit of a -core kind of influence on here as well, obvious from the mathcore tag, but I didn't actually expect breakdowns for some reason, but they're on here, infrequently though. I do think that these guys have interesting ideas though, they really seem to just want to explore all sorts of sounds, which is a good thing, I just wish that they might eventually leave behind some of the duller aspects of their sound.
Probably the biggest problem for me with this record would have to be the vocalist, not that he's bad, but I feel he's a bit out of place. For the majority of this record he's either yelling or growling, which doesn't sound all that great over a jazzy section, as you might imagine. I also found that when the band tried to go really heavy, the beginning of 9(Nine), it sounded a little contrived and the low growls just didn't seem to work. I should say that's it's not even that I don't like his vocals, I just think that he's a little off at times. I think that his style definitely compliments the less metallic aspects of the band's sound, but his growl just doesn't work when there isn't a whole lot of distortion.
It's a decent debut, but not great, it could definitely stand to undergo some improvements. These guys are certainly very talented and they have a lot of potential. Definitely check them out if you like more experimental math rock sort of stuff.
Overall Score: 6.5
Highlights: Algiophobia, Paradigm of The Faith
Posted by maskofgojira at 11:30 AM