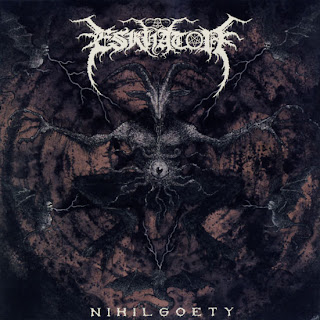 When it comes to modern death metal bands, I'm not a huge fan, or at least when it comes to all these bands coming out with super polished sounding records. In my opinion, the best modern death metal bands, or bands that aren't going, strictly, for an old-school sound, are coming from Australia. How could I not take the opportunity to check out something with a cover like this out.
Besides the kind of speculations I had made based on the cover artwork, I really didn't know much about this band, not that there's all that much out there to begin with anyway. After the intro ends, Transcendental Interstice began and I was a bit taken aback by what I was hearing. In all honesty, just based on the cover art alone, you could get a good grasp on what this sounds like, it's blackened death metal, lots of blasting, guttural growls, and tremolo picking; but that's not what I was surprised by, obviously since I wasn't too far off the mark. What hit me was the atmosphere on here. In all honesty, I don't know if these guys have heard Portal or groups of that variety, but I can certainly see a similar sense of atmosphere between the two groups. Now, while this is by no means as thick and disorienting as Portal, and isn't nearly as unique, they both utilize a sort of miasma-esque atmospheres that just encompasses their sound and makes it sound a lot more hazy and brooding.
On the downside of this album, the mixing, in addition to the thick atmosphere, does make this album sound a bit muddy at times. Some of the faster paced, and more black metal sounding, riffs felt very jumbled together and just ended up sounding very messy sounding to me. I feel that the sound is also a little quiet, which might just be my copy, so this should really concern anyone else. But on a more positive note, I really have to compliment all the players on here, the guitars do a solid job of creating some cool riffs. Tracks like Spacequake and Poltergeist Possession have some great riffs that just stuck in my head immediately. The drumming is also very well done, I loved how I could hear, in my head at least, every part of his kit being utilized, every cymbal and tom, hear Xenolith of Doom for a good example. But really the whole album has some great performances on all fronts, those are just some of the standouts to me.
This album surprised me, even though I came in expecting this sort of style, for the most part, I still enjoyed it. I'm not huge into the whole blackened death metal sub-genre, but this is a really good album. Definitely check it out if you like stuff that's similar to bands like Portal or Incantation and Immolation.
Overall Score: 8
Highlights: Spacequake, Poltergeist Possession, Megaloport
Posted by maskofgojira at 11:38 AM