Ebonylake - In Swathes of Brooding Light (2011) 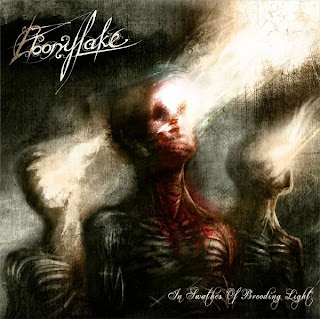 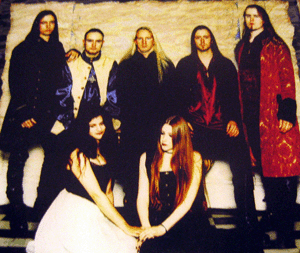 Here we go, over a decade after their debut full-length, the second release from forward thinking metallers Ebonylake comes out. Their debut is one of those albums that isn't all that well known and is often overlooked when it comes to unique metal records from the 90s. Having, essentially, fallen into the depths of obscurity, the band now return with an album that might finally get their name out there.
The first Ebonylake record had a sound that mixed the likes of Meshuggah-esque grooves, Gorguts technicality, mid-era Dimmu Borgir symphonic tendencies, and vocal acrobatics that brought in everything from death metal gutturals to female singing. But when looking at that album compared to this new one, you'll notice a big leap forward in many ways. Compared to this new album, the first one is almost laughably tame, the orchestrations and overall complexity in composition on this release is near staggering. It's one of those albums that really took me aback when I first pressed play. Opener And From The Seas The Sickening Things sounds like several songs being played at once, and it took me a while to really get a grasp on what was happening. Also, the way the album is structured, as a whole I mean, is pretty interesting because the first half of the album is extremely intense and densely layered while the second half expresses a lot more ambiance and is a lot more open and somber, though neither side ever rids itself of its freak-out moments entirely. As the album progresses, the overall craziness and incoherence, and I do use that term lightly due to some parts literally sounding almost nonsensical and coming from way out in left field, even for me, does decrease and while I never recommend listening to an album from the end to the beginning, because who would really do that anyway, if you're not sure about this album, I'd definitely take a listen to songs from the back half of the album before going in further.
One of the things I admire about this record though is that despite upping the ante on almost every level, they've kept the same romantic atmosphere. Even with how the complexities that are exhibited on most tracks, the air of that sort of classical and orchestral nature is spread across this album. Maybe it's the more avant-garde compositions that recall bits from Arvo Pärt and John Cage at times that help to bring, or at least maintain, that sort of ambiance throughout the album. I found that these influences came to a head on the minimalistic ambient piece The Theory of Sexual Carvings which really does help to bring things down to a calmer, though no less creepy, level before closer A Voice In The Piano. For myself, it's on this closing track that the band finally piece together a song that is their most coherent and melodic; granted, it's far from being straightforward, but compared to what came before it, I was able to sink my teeth into it within the first listen.
Now, I'll make no claims that I even begin to really understand what most of this album is about, I certainly have no idea what's happening in some spots. This is an album that, even after three solid listens through I still have a bit of a hard time really picking things out, some songs more than others, so it does take time. I highly recommend you checking this out though if you're into avant-garde metal or at least avant-garde composition.
Overall Score: 8.5
Highlights: I Painted The Suicide of Neptune, Licking At The Nesting's of Young Fledglings, A Voice In The Piano
Posted by maskofgojira at 7:37 AM