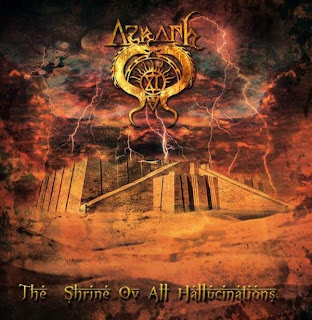 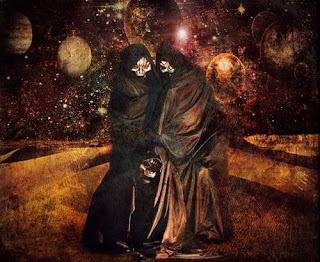 I'm not really sure what to say about this record, I mean as a preface anyway. I looked into it because it seemed interesting, both the cover and the picture of the band without much thought into it. After looking into them a bit, the three members all come from groups that I don't care for or have never heard of before.
Ok, let's get something straight, being pretentious is fine, I get that, progressive music is totally pretentious, tons of solos for musicians to sort of just jerk off, and I get the black metal thing. I can even understand the pompous use of orchestras in the whole power and symphonic metal realms, but there was something about this record that just got me really pissed off. This thing comes off sounding like a Behemoth rip-off trying to go a bit Dimmu Borgir by using orchestral based synthes, and later on an almost Ved Buens Ende influence starts coming through. I'm not a fan of either of those bands, so right away this thing didn't get on the right foot with me. It's how pretentious these orchestrations wind up sounding to me, and it's not even like they're overblown or totally over-the-top like Dimmu Borgir's more recent output, but it sounds so dull and unnecessary and it continually pissed me off, and in all honesty, the orchestral synthes aren't even put that high in the mix and at times can barely even be heard, but there's just something about them that got on my nerves. The atmosphere on here is also very dry which honestly made the music start giving me a headache about halfway through.
What's probably the worst thing about me not being able to overcome that one hump is that I actually think these guys are doing some interesting stuff. Sure, vocally it comes off sounding like a Nergal (Behemoth) copy-cat, and that's the biggest reference towards that band, but musically these guys do some interesting things. The band definitely lie somewhere between black and death metal, but there are more melodic and progressive bits thrown in as well, Imposing My Will for example. The Ved Buens Ende influence that shows up on here is quite minimal, with the occasional break into jazzy territory and clean vocals being used on Where Memories Fade to Tragedies and Humanitas Detestabilis. It's during moments like these that I thought the band started to show some signs of promise, where the atmosphere and the riffing came together and the clean vocals were well performed.
In all honesty, though this review does come off a bit negative, there really isn't anything wrong with this album, it just came across badly to me. I know there will be plenty of people who will get into this and I hope they do because these guys definitely have some cool ideas. Check it out if you like some symphonic influenced blackened death metal.
Overall Score: 6
Highlights: Under The Third Moon Oracle, The Omnipotent Paradigm, Humanitas Detestabilis
Posted by maskofgojira at 10:18 AM