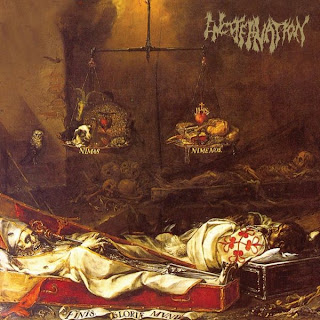 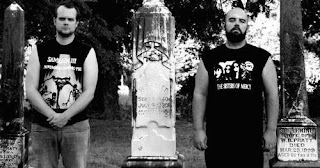 Wayne Sarantopoulos, otherwise known as Elektrokutioner, is a busy man, he easily has over five bands going at the moment, this one being one of them. In the last decade his many bands have been pumping out old-school variations of death metal into the underground for dorks like me to just eat up. After their praised debut last year, "Ritual Ascension Beyond Flesh," we have this new album which I've heard is just as good.
One could make a case that Encoffination has actually undergone a sort of transformation or evolution since their debut last year. Unlike several of Elektrokutioner's other bands, make a note that they're not all like that though, there is a shift in the sound on here, and it's more than one based on production. Some of his other bands have remained pretty true to their old-school death metal sound without much variation, but this one really sees a sort of change. Sure, it's still death/doom, that hasn't changed, but I feel like the first album was kind of like listening to a band play in a cave, with everything sort of reverberating and bouncing back at them to create a giant wave of sound that was more than a little messy sounding, this sounds more like they're playing in a church or cathedral. The sound is a lot clearer, but retains a similar sense of cacophony and reverberation. The use of tubular bells and gongs throughout several of these tracks only adds to that feeling. The open sounding, reverbed-as-hell drums on the last two tracks are great additions into the fold as well, they just echo out and create this monstrous atmosphere and raddled behind the guitars. I should make note that those instruments were used on the debut as well, I just found them more poignant on here.
I felt this was a much more graspable album and it was a lot easier to kind of digest than their debut. The songwriting is a lot clearer as well, the riffs, while still being really thick and distorted, are a lot easier to make out. When the duo go doom, hear the end of Elegant In Their Funebrial Cloaks, Arisen for example, that's when I really got excited, because that's really what I feel the essence of death/doom is, and there's even a bit more of that romantic feel that was present on the early albums by the Peaceville three on here as well. As I'm writing this it just struck me that you actually can hear more of that early My Dying Bride or Paradise Lost kind of vibe in there, not a lot mind you, but it's definitely in there. But I can't discount the other half of the duo, Ghoat, who does pretty much everything but the drums, definitely brings the greatest elements to the album, the riffing and the low-gurgling vocals. Without him, I do not believe that this band would differ from other death/doom bands, much like their other collaboration, Father Befouled does. The album really moves further into doom territory in it's ladder moments, which I personally enjoyed, but definitely show why this band differs from Elektrokutioner's other bands, his use of extremely dense and huge sounding atmospheres absolutely covers this album, which might be a turn-off, but if you love atmosphere, much like I do, than this is a must.
This is the type of death metal that I love to hear, it's old-school, low and slow, but with plenty of dynamics. It's a great slab of death/doom that should definitely appeal to any fan of death metal. Definitely check this out if you like your death metal brutal, atmospheric, and crusty.
Overall Score: 9
Highlights: Rites of Ceremonial Embalm'men, Crypt of His Communal Devourment, Annunciation of The Viscera
Posted by maskofgojira at 11:43 AM