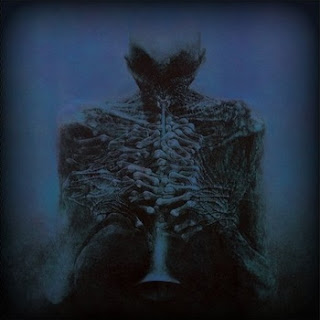 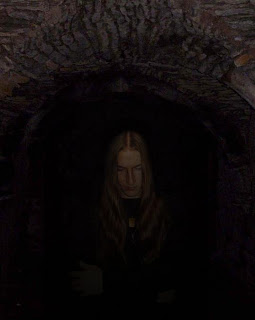 When I saw this album cover, I knew I absolutely had to hear it. I know I've said it numerous times before, still true, but this just looked dark and twisted sounding, kind of like a H.R. Giger painting, or really any of his art. Plus, I saw the song lengths, and I just thought, "This has to be good."
This is an interesting little album and I'm sure it will have a lot of haters out there for the sound I'm going to describe, but it's still very solid. Sonically, this has quite a bit in common with groups of the Cascadian scene. The utilization of acoustic guitars, harsher black metal riffing, and more mid-tempo riffs are all used, and while that shouldn't immediately flag a band as being a part of that scene, you can hear elements of groups like Wolves In The Throne Room, Panopticon (who aren't really even a part of that scene anyway), and a bit of Skagos in there as well, though whether or not they were influences is debatable. In addition to that you have the heavy atmosphere which at times does recalls aspects of nature, like rain, mountains, or forests, but that's just me. While that might sound bad, the whole Cascadian sound, compared to some other groups I've heard debuts from this year, and this is a sophomore album, with the debut full-length being released last year by the way, this is a lot more focused and less constrained to simply being another Cascadian band, or project.
Perhaps it's because there is a bit more vitality in here that I feel it separates itself from some other bands in that scene, since the riffing on here, which definitely owes a debt to WITTR, make no mistake about that, is a lot more up-tempo and melodic, which gives it a lot more of a vibrant and youthful sort of sound. Now, I won't lie, there are certainly moments on here that are more exciting than others, the first two tracks are definitely the two that have the most interesting variations in them, with the shortest track, Mourner's Requiem, being quite average and underwhelming in comparison to the other four tracks before and after it. Some tracks do get a little tedious at times though, since all but one track actually top the ten minute mark, and it can make it very difficult to try and not think of this band as simply another Cascadian rip-off group. I actually wanted to stay excited throughout this if only because I do feel that there's some interesting ideas that come up now and again that bring up more originality than simply being more energetic. I feel like the closer, Hollow Verses, does a good job of kind of doing what WITTR did with their most recent, and last, album by having more epic sounding keys used to accentuate the song at various points throughout the song.
In the end, I wish I could work up more enthusiasm about this album, because it certainly has moments that are great, but others are just painfully average. I do look forward to hearing the next album from this project because I do feel that this album does bring forth some nice ideas. Definitely check it out if you like the Cascadian sound, but with some additional elements thrown in there as well to spice it up.
Overall Score: 8
Highlights: The Tongues of Traitors, Hollow Verses
Posted by maskofgojira at 9:35 AM