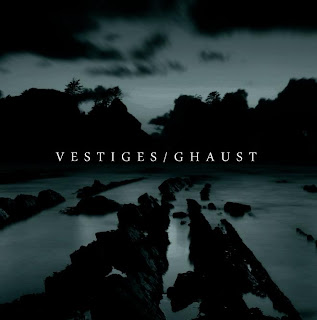 Last year Vestiges released their debut full-length to much acclaim from underground press. On the other side of the world we have Ghaust, a band I had never heard of before receiving this split, so I was pretty fresh coming into their side. This is, from what I understand, the first of three splits that Vestiges have coming out.
Vestiges bring an epic ten-minute track to the split, effectively making it hard for Ghaust to really top it. This is, basically, a post-metal song that makes use of everything from their debut, the post-rock, the screamo, the black metal, and the hardcore. In essence, I don't think it's really anything new for the band, but it certainly has a great amount of variety and energy in it that keeps it from getting dull, constantly shifting around. It's one of those songs that maintains the ability to sound post-rock while, except for the beginning, never really adhering to that sound strictly.
Now onto Ghaust's side of the split, which houses two songs. Now, what you're getting from both tracks is a weird sort of post-metal sound, I say weird because it's constructed and sounds different than the multitude of bands emerging from Europe and America doing this style. At times the band go into a near thrash sort of assault and it really made me do a double-take to make sure I was really listening to the right band and make sure the track didn't skip. It's a bit odd, because between the two tracks, you get an amalgamation of post-rock, thrash, crust punk, shoegaze, and post-punk, it shouldn't go together but it surprisingly works. There are moments where it's really melodic, which isn't all that surprising, but it's when it goes a little spastic and dissonant during Sleep and Release that I seriously was surprised, it sounded like something out of a mathcore record.
It's a nice little split with good solid songs from both bands. Personally, while I don't think Vestiges really did anything new with this track, and having never heard Ghaust before, I think it's three pretty good songs. I don't think it's really anything to write home about, but if you're a fan of either of the bands, I think it's definitely worth looking into.
Overall Score: 7.5
Highlights: VI, Sleep and Release
Posted by maskofgojira at 8:01 AM