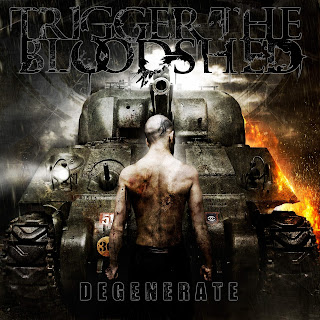 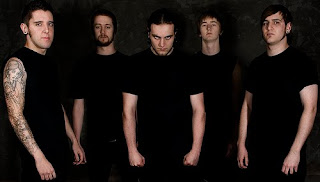 Spreading Their Disease.
Trigger The Bloodshed is a UK based death metal band. In their relatively short existence so far, they've release 2 previous full-lengths that drew attention to not only them but the entire British extreme metal scene. This new album contains some of their best songs yet.
This album shows a phenomenal leap forward for TTB. Their last two outings have been heralded for great performances and their second one was praised for the move towards more traditional brutal death metal sounds. This one continues on the path within that genre, but the songs on here are so much more catchy and filled with hooks that it's hard to see the link between this album and their debut.
The band has indeed introduced new elements into their sound and they have paid off. The first of which is the tempos on this album actually vary within a single track, their previous outings have been blast fests for the most part, rarely giving you any room to breathe. The second is the addition of drummer Dan Wilding has allowed so much more extreme drumming to come into the band's sound, and being a drummer in bands such as Aborted and The Order of Apollyon you know he's certainly a beast behind the kit. The final thing is the use of guitar solos that actually fit the track their own, hear songs like Dead Vein for proof of how well these work.
The musicianship on this album is another big step forward for the band. The riffs played on this album retain the trademark brutality that the band have been moving towards, but also have so much more melody and technical precision as well. Tracks are much more effective than ever before, riffs have become easier to digest while making entire songs catchy enough to have on repeat, just hear tracks like the aforementioned Dead Vein or The Soulful Dead.
Once again vocalist Jonny Burgan is spitting venom behind the mike. His range as far as a death metal vocalist is one of the best to come out in recent years from a band so young, literally young. He switches up his style from track to track, one of the best examples of his range is in the track Hollow Prophecy which features some excellent guttural growls while A Sterile Existence feature some great speed.
Overall, this is a massive leap into the right direction for this band. These guys are fast becoming big names in modern "real" death metal and for good reason. If you like old school death metal done with modern production and that is catchy, check this out for sure.
Overall Score: 8
Highlights: De-Breed, Hollow Prophecy, Until Kingdom Come
Posted by maskofgojira at 12:46 PM