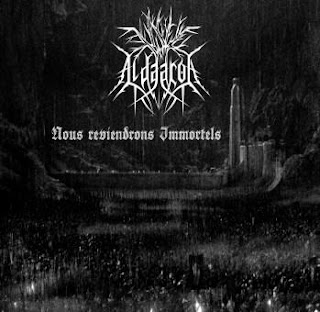 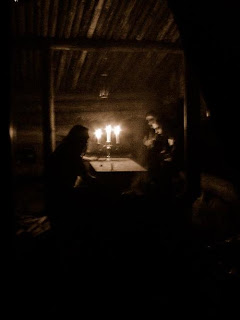 Aldaaron is a pagan/black metal band from France. This is their debut full-length after a 2007 demo. The band has stated that their influence comes from the epic nature of nature itself.
Despite being what could be considered a by the book act, this album, and band, still are at least trying to put their own spin on a genre long since overdone. Your standard affair of tremolo based riffs and howling vocals is still there, and even with a healthy dose of melody as well, but it's really in a few odd points where this band really decide to change it up, even if it's only for an instant, and I mean that in real time. The pagan side of their sound is fairly standard as well, with some more folky riffs and melodies and some more chanting clean vocals are used as well.
At almost random moments within Seigneur De L'hiver, you'll hear a short flute or woodwind instrument playing behind the guitars, and this is pretty quick, it doesn't stick around. The band even manage to make use of clean guitar within several tracks, like En Route Vers La Bataille or Nirnaeth Arnoediad II. I wouldn't say these guys ever go too far to be considered progressive in any way, but they certainly try and get their sound a bit more epic while trying to stay within that pagan/black metal core.
The band still like to stick true to that Dissection sound of melodic black metal for most of the album though, tracks like Royaume are fairly straightforward without too much deviation from it's structure. While this is one of the few tracks that is actually like this, it's actually these tracks that are some of the best, because of the other tracks that tend to meander within themselves and take away from some of the more focused aggression of black metal. Tracks like this one are aggressive from start to finish and really get the blood flowing after tracks that cool down for a while before getting fast again, if at all.
Overall, this is a decent record, nothing really all that new or original, but a nice shot at the genre. Fans of the bands like Dissection, early Enslaved, Watain, or even Gorgoroth could probalby like this a lot more than I did. Nice, but not really anything special.
Overall Score: 7
Highlights: En Route Vers La Bataille, Royaume

Posted by maskofgojira at 12:34 PM