Kingdom of Sorrow - Behind The Blackest Tears 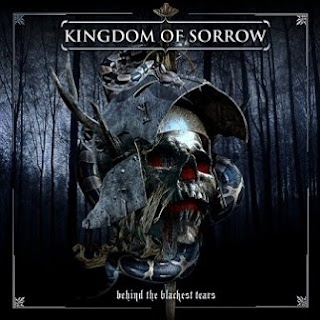 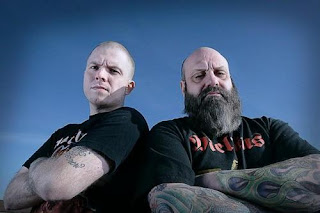 Look At The World Around Us.

Kingdom of Sorrow is a Louisiana based sludge metal band. Formed back in 2005, founding members Jamey Jasta (Hatebreed) and Kirk Windstein (Crowbar, Down) came together to create what was one of the most anticipated albums of 2008. Two years later they're back with a more focused sound that demonstrates a newer sense of melody and groove.
This album demonstrates a much better sense of songwriting and crafting than the debut did. Tracks on here are slower, darker, and more groovy than before, there are still plenty of fast moments, but the songs on here have been referenced towards artist like Black Sabbath, Trouble, and The Obsessed by Kirk. These tracks just allow so much more melody to flow through them due to the slower pace of things.
Right from the intro of Enlightened to Extinction, the riffs are just heavy and bluesy. The riffs on here do essentially recall the bands that Kirk mentioned, but still have plenty of their own flavor in them, and despite being very groovy and sludgy, they are just so damn catchy, hear tracks like God's Law In The Devil's Land or Envision The Divide. Like mentioned before, there are still some moments of faster stuff on here as well, tracks near the end of the record like Sleeping Beast or Salvation Denied are much more in the vein of tracks from the self-titled record.
For those that heard the debut record, they'll be able to safely say that Jamey did most of the vocals on that album. This album is probably about 50/50 in terms of vocals, with Jamey doing about half, and Kirk doing the other. Despite Jamey having his own style of screaming, on here he utilizes a lot more range on here, at times even singing. Kirk's own brand of yelling screaming is a really great mix with Jamey's style.
It's hard not to find at least one of these songs catchy, tracks like the already mentioned God's Law In The Devil's Land or The Death We Owe are some of the best tracks I've heard all year, they have great riffs and great choruses. Each person should be able to find something on here they like, whether it's just one song, a riff, or a vocal line, this is gonna have something for everyone.
Overall, this is a really great record with a lot to offer a listener in terms of catchy riffs, great choruses, and melodic solos. If you were a fan of the first Kingdom record, you'll most likely dig this one even more. One of the better releases I've heard this year, check this out.
Overall Score: 9.5
Highlights: Every Song Is A Highlight

Posted by maskofgojira at 9:56 AM