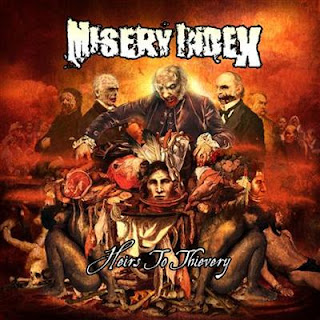 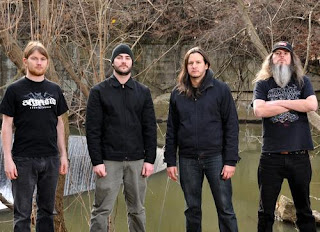 Continue The Legacy Of Your Fathers.
Misery Index is a grindcore/technical death metal band from Maryland. Originally starting in the early 2000's by ex-Dying Fetus vocalist/bassist Jason Netherton, Misery Index has become one of the fiercest bands to come out of the underground and achieve mainstream acceptance, to a degree anyway. This new album continues the path of their last record with catchy and aggressive tech-grind.
This album is short, fast, and angry, for those of you who are long time fans that might not seem any different to you, but the overall album is much more in the vein of punk instead of thrash or death metal. This record is still unmistakably a death metal record, but you'll hear more Napalm Death than Cannibal Corpse on this one in particular. Songs on here are shorter than ever, only one track passes 4 minutes, but in replace of longer tracks you have a much more aggressive record.
Jason and Mark's (guitar/vocals) vocals have never sounded better, with Jason's lows dominating most songs, but having trade-offs between the two sound just as poignant. I can't say that the vocals Misery Index have ever used were unique, but they've always been highlights, proving great vocal hooks that stuck in your head. Never can it be said that Misery Index don't have the ability to have amazing hooks in their music.
Musically, the band have their sound and are now taking some small risks and seeing what works out with this sound of theirs. On The Spectator, the band add in some melodic death metal to their grinding brutality and it easily churns out one of the catchiest riffs on the album, while The Seventh Cavalry is the slowest track on here, not really going into sludge or doom territory, but certainly much more groovy. Even the hint at black metal in Plague of Objects is a new thing for the band to include into their sound. Nothing drastic is going to really differ this from any of their past work, but it's still some of the best out there.
But if experimentation is not what you want from this band, the last 3 tracks on here are where you need to go. Tracks like You Lose and Sleeping Giants, which also happens to have a vocal cameo by John Gallagher (Dying Fetus), are short, aggressive grinding tracks that stick to that over melodic solos or any sort of experimental tendencies. While these aren't the best tracks on the album, they still have plenty to deliver to any listener that wants a shot of speed.
Overall, this is another great release from an ever rising star in death metal. If you don't know about this band, this would be a great place to start from, if you're familiar with their older work, this won't differ too much, but it's still great. Some of the best death metal to come out this year.
Overall Score: 8.5
Highlights: The Carrion Call, Heirs to Thievery, The Seventh Cavalry

Posted by maskofgojira at 12:10 AM