A Forest of Stars - Opportunistic Thieves of Spring 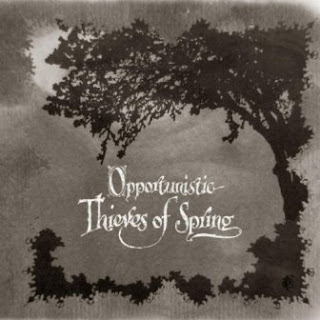 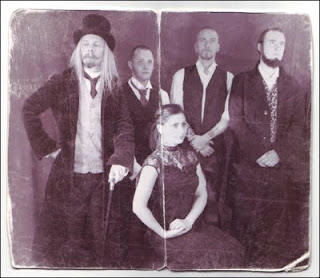 Winter Into Spring Into Fall.

A Forest of Stars is a progressive black metal band from the UK. Having garnered praise from the underground scenes with their debut release, "The Corpse of Rebirth," back in 2008, this band has to now live up to the hype. This release is also the first to feature ex-My Dying Bride violinist Kati Stone (Katheryne, Queen of the Ghosts), on violin, flute, and vocals.
What might strike a chord for some as odd, especially those that expect this album to be of a similar style of the debut, might be the first 3 tracks on here. While the debut really seemed to blend post-rock, psychedelic rock, folk, and primal black metal together, the first 3 tracks on here seem to take an almost symphonic approach towards their performance. What this is referring to is both symphonic black metal and more orchestral vibes. Opening track, Chapter One: Sorrow's Impetus, really builds itself up using violin and flutes before it finally bursts out into more of a traditional black metal sound.
A more typical style of black metal follows that first track for the next two, as stated; but even within these more typical song styles, there is still a definitive sound that is both AFoS as well as progressive in a sense. Violins and flutes can often be heard in the background of buzzing guitars and blast-beats adding a very unique atmosphere. The band even makes the use of acoustic guitars within their songs as well, often that break from the normal electric sound. Within Chapter Two: Raven's Eye View, the band even makes use of what sounds like bongos or some sort of acoustic percussion along side blasting drums.
The nature of experimentalism that seems to be carried throughout this entire album, whether it's an entire song or just a small section, really makes this record an individual among many clones. Just the use of flutes and violins, not as a part of an orchestra, but as individual instruments, alone, makes this band a bit different. Their use of very morose piano lines throughout Chapter Three: Summertide's Approach also is very distinguishing. Like stated above, the first 3 tracks are really where the band gets their black metal excursions out of their system, from Chapter Four: Thunder's Cannonade onward, things move even further into psychedelic and progressive avant-gardisms.
The vocals on this album are also a bit different from your typical black metal, or metal in general, band. Mister Curse's vocals sound very hoarse sounding and are more yelled more than screamed or growled, at times he even sounds like a mad man. Stone's vocals on the other hand are delicate and soft sounding in comparison with hear clean and precise singing. At one point a vocoder is actually used as well.
The band, although odd and unique anyway, actually manage to create some of their most eye-widening moments in the final 2 songs. The ending of Chapter Five: Starfire's Memory and the beginning of Chapter Six: Delay's Progression are ambient excursions that are hypnotic and captivating. While these parts most likely won't appeal to those that want that constant rush of adrenaline and aggression in their black metal, like the earlier tracks on the album did, this allows the album to kind of calm down after so much anger and rage.
Overall, this is an album that could take a few listens to grow into and fully distinguish between everything that's going on. This is another album that fans of experimental extreme music should definitely consider checking out. This is unique and original sounding in a way that very few other bands have ever managed to do, the only real comparison between this album and any other bands, would have to be the great Summoning, but even that is stretched. Check this out.
Overall Score: 8.5
Highlights: Chapter Three: Summertide's Approach, Chapter Six: Delay's Progression
Posted by maskofgojira at 2:53 PM