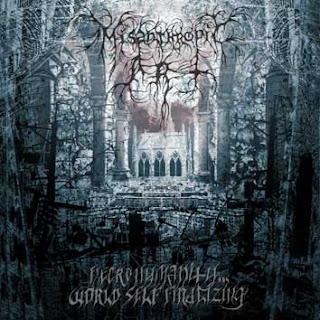 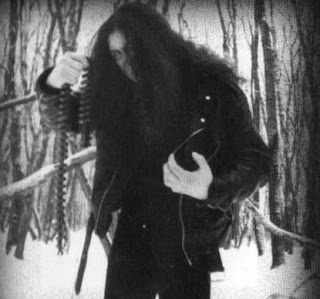 Nothing A Little Medication Won't Help.

Misanthropic Art is a symphonic black metal project from Russia. Founded and solely made by Sadist, this project has spanned 4 full-length albums, including this one. This newest album once again takes his hatred toward the world to another level, both lyrically and musically.
Above I mentioned that this is a symphonic black metal project, and that is not entirely accurate. One could see the category of symphonic used the same way here as industrial is used in a group like Anaal Nathrakh. There are a lot of symphonic textures and melodies soaring through this album, but they never dominate the sound or try and make the music more bombastic in the same way bands like Dimmu Borgir or Cradle of Filth do. The symphonic elements also add more depth to the overall sound, because they don't just range in the normal orchestral manner, you do have those types of keys on here, but you also have a lot of other sort of more textural things going on that could also be described as industrial.
The production, which has to be mentioned, is very raw sounding. The sound quality is very low, with everything sounding quieter than it probably should, things can be heard clearly most of the time, but every once in a while, like in Green Sleep of Sickness, you might hear some sounds just start to get jumbled together. While one reading this might assume that this is, or the way I'm making it sound, a bad thing, but it isn't actually. The fact that this is more lo-fi sounding really harks back to artists like Xasthur who pull-off lo-fi and make it sound good.
The music on here, besides the keyboards, is fairly straightforward sounding black metal. You have your fast tremolo picking and your fuzzy sounding guitars that give the authentic and raw sound of early black metal, but you'll also get some more death metal parts in a few songs. Most of the time, the vocals and the keyboards are a lot higher in the mix than the guitars are, so your ears will most likely be drawn to them first, but the guitars do manage to pop up when things go into a more atmospheric sound.
But even in one of the 2 title-tracks, Necrohumanity, Sadist manages to show the ability to compose a rather unique sounding interlude. Within this track you still have the lo-fi production, but the music held inside is much more ambient and industrial tinged keyboard melodies. This 5 minute long interlude could provide an almost cinematic look as to how the rest of the album, keyboard wise, is composer or played.
However, it is the 9:30 closer, The Down, that truly captivates. This track goes off like an atomic bomb of industrialism and modernism; with slower moving guitars, haunting ambiance, and cascading waves of industrial melodies being the focus within the track. Moving like a machine in it's performance, one can see a view into Sadist's world with this track.
Overall, while not being something that was expected to amaze me, really did. While this album is really different, it really doesn't really have an attention-grabbing sound until the final track. Fans of artists like Xasthur who can enjoy longer and more lo-fi sounding black metal that has experimental tendencies should definitely check this out.
Overall Score: 7.5
Highlights: Worldselffinalizing, The Down
Posted by maskofgojira at 1:31 PM