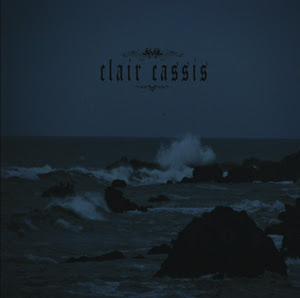 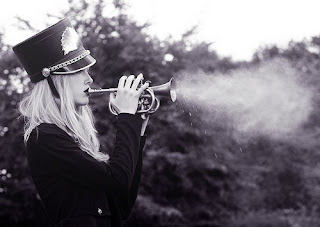 Out Of A Cacoon Into A Butterfly.

Clair Cassis is an atmospheric black metal band from Oregon. This project was born out of the ashes of founding duo's previous band, Velvet Cacoon. This project really seems to carry along with the same sort of principle style as that band did.
The sound of this band, and mainly this album, definitely have similarities to Velvet Cacoon. The sound on here is very based on the atmospheric and ambient sound, one of the few bands that actually manage to suit their title, allowing the music to be very open and spacey. You won't find a lot of blast-beat driven parts on here, slower, more shoegaze type riffs and playing is the real sort of style. The music is once again done with influence from drugs, drug trips, and luxurious life styles. Josh's voice is still high and very screeching, but is still farther back in the mix so it doesn't provide a big problem.
This album is not particularly long, being just over 30 minutes, which when compared to other artists within the genre, or even the duo's previous incantation, are never that short, usually being closer or above 40 minutes. Most tracks on here don't even break the 5 minute mark, but while being short, are certainly filled with enough content to please older fans of the group, hear tracks like Our Overwintering In The Ivories or Noctilucent Petrichor. The short length of songs makes this a lot more accessible than the latter albums from VC, that contained tracks 20 minutes, by this I'm referring to the ambient "Atropine" record.
The music on here could be seen as a lot more melodic and less blazing. The sound on here is not harsh, once again, recalling more of a shoegaze and ambient more than black metal, though a track like Pearls & Pinesmoke does bring that much more to the forefront of the sound. The melodic edge makes things on here far more catchy and ear friendly, worthy of several listens.
It was brought to my attention in another review for this record that besides the main duo of Josh (vocals, guitar) and Angela (bass), that a new member had been brought into the fold. The band have now hired a drummer, d.Marvin and brought him into the writing process, a position previously held only by Josh. This seems to have really done wonders for this debut, allowing the percussion to have so much more variety than the simplistic drum patterns used within VC.
Overall, this is a good debut, and a welcome addition to an experimental fan's collection. While the band still have their core sound in black metal and their goal in creating atmosphere dominating music, the melodies on here are far easier to get into. If you want to check out something that is a bit easier to get into than someone like Xasthur, this is where to look.
Overall Score: 7.5
Highlights: The Feathered Fog, Pearls & Pinesmoke

Posted by maskofgojira at 12:52 PM