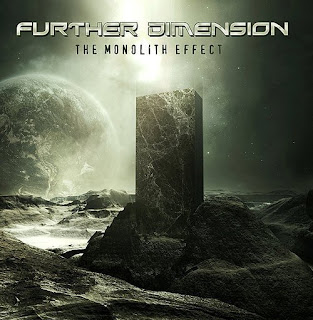 Further Dimension is a progressive metal band from France. Featuring members of power metal troupe Inner Visions, so you can imagine that this is not your newer style of prog metal. This album is sure to please any fans of groups like Dream Theater or Fates Warning, no problem.
This album really experiments with different genre, really trying to find it's own sound. Taking elements from the 2 groups mentioned above the most, but also from groups like Porcupine Tree and Meshuggah as well, sometimes these combinations work, other times they don't. For the most part though, you can count on the majority of the tracks to have a pretty standard sound, for prog-metal, to them, sometimes they go off into the weirder tangents mentioned before, but that's not in every song.
The riffs on here are generally good, maintaining a very thrash feel within most tracks, hear the opening pair Doomed and Greed. The guitar playing is, naturally, more progressive on longer tracks, like Further Dimension or the 3-part title-tracks, The Monolith Effect I-III. There's even a bit of the band's own take on a very progressive Meshuggah in the middle of the album, with tracks like Stare of The Sunken Eye. The few acoustic moments are much appreciated due to most of the album being metal, the acoustic, and occasionally even jazz, moments can make you appreciate the heavier side that much more. The solos on here are actually all very good and quite different from each other.
Vocally, what you have here is your standard heavy metal vocalist, higher, semi-operatic range. There is enough of a range though to keep your attention or just getting sick of him, switching between more death metal growls in The Monolith Effect I or lower and harsher tone in A Certain Idea of Human Kind. The layering of the large range is really good when harmonies are exhibited in any track, showing a very large and almost "unique" kind of sound.
Though most of the tracks on here go over well, as stated above, there are a few that don't get their message across as well. The neo-prog/power ballad of Is This The World We Created feels a bit out of place and tries to cover too much ground within it's short time. While it's follow-up track, Middle Age, feels a bit scatter brained in terms of what it's direction is trying to go.
Overall, this is a good, fairly varied progressive metal album. Fans of prog done the old-school way will definitely find this album enjoyable. If you're not a fan of the whole Dream Theater of Fates Warning thing, this would be a good introduction to it.
Overall Score: 8
Highlights: Further Dimension, The Evil Power of Their Souls, The Monolith Effect II

Posted by maskofgojira at 1:03 PM