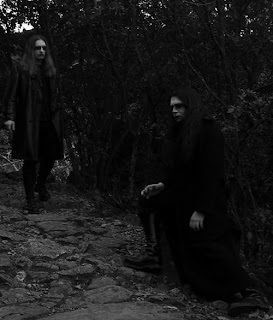 Celestia is a black metal band from France. Having been started in the mid 90s, it wasn't till 2002 when the band was finally able to release a full-length album. Nowadays Noktu is the only remaining member from the first line-up and continues to be the principal songwriter.
Starting out with acoustic guitars, one would wonder if Noktu wanted to go into a more post-black metal sound, but you would be proven wrong. Once the intro portion of the opening track, Grandiohsia Obverturae/Vue Du Ciel, ends, the normal sound comes out. This album is pretty much a punch in the face kind of black metal done with a bit of a rock'n'roll spirit that manages to go off the beaten path every so often.
This whole album is pretty consistent with old-school black metal sounds. The production has a rawness to it, no produced layering or high quality stuff on here, giving it a very live kind of sound. Saying this, don't misinterpret it meaning that this is in a Darkthrone kind of sound, think more of a Mayhem sort of vibe. This is the type of album where you could just picture the guys playing these songs in a rehearsal room together.
What is most surprising throughout this album, is the incorporation of certain touches of other artists within the format of Celestia. On Dogmatii Duality/Au Crepuscule Sous Les Larmes you get a bit of the post-black metal/blackgaze style mentioned before hinting at a bit of Alcest, Neige was in this band for a time as well, using acoustic guitars, more moody tremolo picking progressions, and a more sombre atmosphere throughout the track. Phoenemenae of Creation takes on a bit of a Shining kind of flavor throughout the track, which contains some of the best vocals on the album on it, with a bit of a darker mood then other songs.
Overall, this is a decent album that has some really great traditional sounding black metal on with a few experiments in it. This album is under 35 minutes so it's not that long either, really showing you a bit more than what might have been expected in a short amount of time. If you're into old-school black metal that leans a bit to left field, this is worth checking out.
Overall Score: 7.5
Highlights: Demhiurghic Deity (Devilution), Dogmatii Duality/Au Crepuscule Sous Les Larmes

Posted by maskofgojira at 7:21 AM