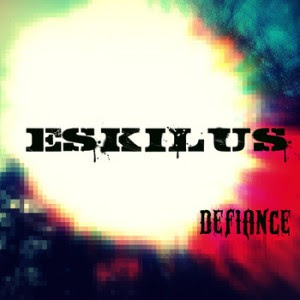 In Defiance Of All That Is Prog.

Eskilus is a progressive death metal project from North Carolina. Consisting of 2 main members that write, compose, and perform everything, this is obviously going to differ from your typical Opeth cover band. This is another young group that is sure to gain steam from Internet promotion.
The duo site that they are influenced by everything from metalcore to thrash to doom to hardcore, as well as classical and other styles as well. From the riffing on this album, a definite thrash and -core sound are present, with fast, progressive riffs but breakdowns as well. You'll find a lot of different synthe sounds throughout the album from piano to ambient sounds in the background. While most tracks are kind of a mix between deathcore and progressive metal, most tracks tend to lean further to one side rather than somewhere in between, for example, the title-track, Defiance, is much more of a deathcore, metalcore,-core song, while Failure to Assimilate shows much more of a prog leaning.
The production on here is not the best, making everything sound a little too raw. The guitars are very beefy sounding on here, sounding close to demo quality, but you can't really hold that against them for an early recording. The fuzz on the everything also adds to the overall beefiness of the guitar tone.
The vocals are very throaty, if you listen, you can hear some phloem in this guy's throat while he's screaming. The vocals are very monotone on here, unfortunately, show very little range. The pig squeals in the final track, Deconstruction of The Mind, actually could have just been removed from the actual track and made the track so much better, and for the most part ruin the track. The lyrics that can be understood from this are fairly redundant -core lyrics that reference a breakup between him and someone else, presumably his girlfriend.
Overall, this is a fairly standard release that most fans of progressive and/or technical deathcore/metalcore will like. Not too much on here is original sounding and at times can actually become boring. If you're interested, check this out.
Overall Score: 5
Highlights: Beneath The Seas, Bred From Deceit


Posted by maskofgojira at 1:26 PM