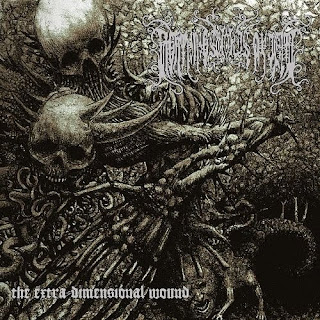 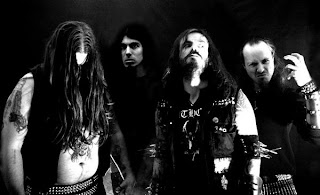 The Winter Comes From The West.

Lightning Swords of Death are a black metal quartet from California. This new album is their second full-length and their first on Metal Blade Records. This comes after a high profile tour they did with Septicflesh and Behemoth back in early 2010.
Taking cues from Nordic and Swedish black metal of the late 80s and early 90s, such as Celtic Frost, Mayhem, and Bathory, this sound is very primal and aggressive. But don't make the assumption that this is some 90's rip-off band, you can also hear trace elements of the American side of black metal, blasphemic and over the top lyrics and vocal performances seem to almost adhere to bands like Judas Iscariot or Angelcorpse. Essentially, what you have here is a band that wants to be from Europe with an American screamer.
Musically, on here you will find no real guitar riffs, poly-rhythms, or out of the ordinary flute solos. The music on here is pounding and punishing, for the most part filled with machine-like double-bass work, frantic bass work, and guitar work that seems to have a rush of adrenaline and taken a dose of speed. You will almost never hear the drums go below 200 bpms in any song, you will rarely be able to discern one guitar riff from the next, and you will almost never be able to hear the bass; but, the whole album does have great tones, the bass is monstrous sounding, while the guitars sound like the scene of someone looking into the mouth of hell. Just to mention, this is really only the first half of the album.
Once Damnation Pentastrike gets about half way into it's 6 minutes, things change a bit. About here is where the music takes on an almost doom like feel to itself, slowing down to Candlemass speed. The guitar and bass chords becoming crushing, and the bass can be heard. The band then decide to continue with their regular approach of just rapid fire assault with the rest of the album once Vorticating Into Scars begins.
Overall, this is a decent record if you're looking for something to give you a rush of adrenaline. Any fan of black metal that likes it's more brutal and aggressive side will definitely enjoy this album. This is going to be a tough one to win people over, but if you can just take it in, it is actually pretty enjoyable.
Overall Score: 7
Highlights: Nihilistic Stench, Venter of The Black Beast

Posted by maskofgojira at 11:01 AM