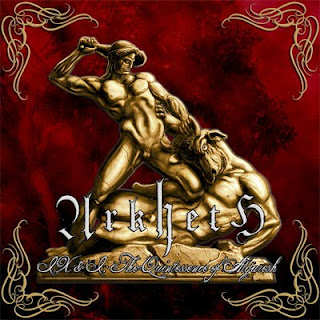 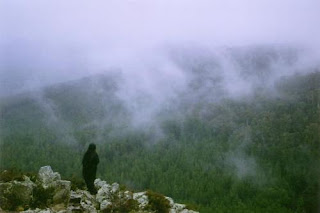 The Epic Journey Through The Seasons.

Arkheth is a black metal band from Australia. This new album, a follow-up to their 2003 debut, "Hymns of A Howling Wind," and reappearance after 4 years of silence, is a double album. Consisting of almost 2 hours of epic black metal that has begun to experiment and dabble in more genres than their debut did.
The 2 hours that this album manages to fill up is composed of only 10 songs, 5 on each disc, and of that 10, only 3 are under 10 minutes, and only 1 of those 3 is under 5. So, as you can imagine, this is a long album filled with twists and turns. Even within the opening track, The Conception and Creation, which also happens to be the shortest track as well as an instrumental, you have a transition from simple symphonic introductions into actual riffs.
The overall sound on here could best be described as a mix between traditional and symphonic black metal, progressive rock, folk, and even a bit of viking metal. Cascading waves of synthe seem to just wash over the top of pummeling black metal, while the occasional breaks into acoustic guitar passages and female vocals also provide variation from a simpler and more melodic approach. The synthes actually manage to range within this release, using the typical way their used in the symphonic black metal genre, but also using them in more neo-classical ways, both in conjunction with metal and in parts inhabited solely by themselves, and for more atmospheric ways as well.
Despite being a black metal record, this album still has some moments where grooves can just you moving, like the bass lines in Kings In Black. Besides the typical blazing riffs that are associated with the style, you have slower songs that contain some of the catchiest moments in them, like the melodies soaring throughout The Breeze The Stirs The Snow. The band even manage to explore the realms of post-rock and atmospherics within the closing minutes of Where The Wind Blows Ether.
For the most part, riffs on here are straightforward and manage to carry the album very well, but that can only go so far. The band have realized this, making long songs demands enough going on to keep your attention, so the addition of all the above was added, but the prog doesn't appear to enter the picture, riff wise, until the final track of the first disc, Faint Winds In The Heart of Orion. This track really moves through different courses throughout it's 10+ minutes. One could see these 2 albums as such, the first which is much more straightforward, riff wise, and seems to focus a lot more on the black and "viking" metal side of the band, the second is much more expansive and progressive, with more odd riff patterns and a greater use of the folk influence as well.
Curiously, over this double album's length, one rarely loses the interest of listening to this. Few moments detract from the overall feeling that the music provides. The almost cinematic feel towards the album is evident within long tracks, and the lyrics which, even from such epically titled tracks like Chronicles of The Ancient Narwynd or The Black Riders of Avernus, seem to tell a story.
Overall, a release any person that considers themselves a black metal fan has to hear. Possibly the only flaw is the length of the entire thing, which can be a bit much at times, but other than that, this is a fine exploration of black metal that is willing to explore, hopefully they do more in future albums. Plenty of catchy riffs, soaring vocals (that mostly are screaming), and great concept, definitely worth looking into for this year.
Overall Score: 9
Highlights: The Breeze That Stirs The Snow, Dewy Eve Upon The Eminent Foreland of Arg'Thorn, Upon The Golden Walls of Dreaming

Posted by maskofgojira at 1:37 PM