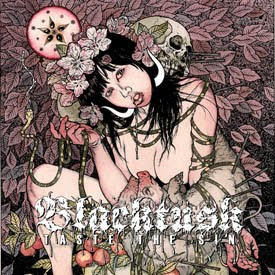 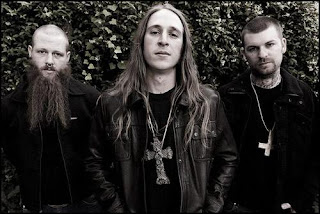 They Have Submitted To The Dark Side.

Black Tusk is a sludge metal band from Georgia. This is their second full-length, and their first release for Relapse Records. Members of this band have also played in doom/stoner band Unpersons as well in the past.
Despite being categorized as sludge, the songs on here are fairly short, all clocking in at under 5 minutes. Some moments recall more thrash than sludge or doom as well, like in the opening track Embrace The Madness. Both the thrash influences and short song lengths really lend themselves to concise, catchy, punk-like songs. This entire album is just under 35 minutes, if that helps you get any idea as to how short these tracks are.
This album, and band, will and are going to be compared to their Georgia peers in Baroness, Mastondon, and Kylesa. There are plenty of similarities between these groups and Black Tusk including the turns into psychedelia and progressive made throughout this album. There are also plenty of your blues-tinged riffs, hear tracks like Red Eyes, Black Skies or Unleash The Wrath. The thing that really does make Black Tusk stand out from any of those bands though is that these guys have shorter songs that can get just as much done, and their nearly not as progressively inclined as those other groups.
Since this is a three piece, everyone is getting to shine on here. You guitar, bass, vocals, and drums all get their spot in the overall sound in the band and no one appears to have been left out. The vocals by the 3 guitarists are distinctly different, while one has a thrash-like shout, the other has more of a Neurosis type of yell. The drums have that Motorhead vibe to them, where the beat is constantly going and it's gonna make you move. The guitars are heavy and bluesy, but never enter the realm of doom. The bass is heavy enough to be heard but not overpower anyone else. That's everyone on here in a nutshell.
Overall, if you wanted something with groove, melody, and a hint of psychedelia, than this is that fix you've been looking for. Plenty of catchy guitar licks and pounding punk beats to keep you entertained. If you like any of the bands above, as well as groups like Motorhead or more punk bands, check this out.
Overall Score: 8
Highlights: Snake Charmer, Twist The Knife, The Ride