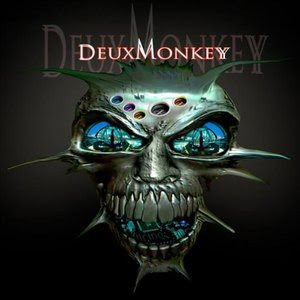 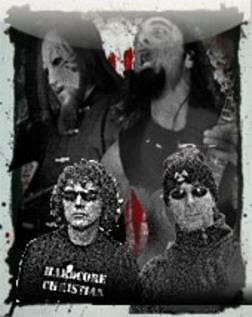 DeuxMonkey is an industrial thrash project led by former Anthrax guitarist Dan Spitz. This is the first official release being put out by the project, containing members of other well known projects. Fans can expect modern progressive metal with hints towards the old school as well.
Besides Spitz, member of this group include Peter Baltes (Accept) on bass, Matt Thompson (King Diamond) on drums, and A.O.H. (Shaolin Death Squad) on vocals. These 4 guys make give the group a very different sound, one where it does sound modern, but has a lot of parts, mainly the vocals, that hark back towards a bit of 80's prog metal, think Queensryche or early Dream Theater. This may put some at a distance just due to the juxtaposition of the music to the vocals.
According to Spitz, this project returns to the aggressive and passionate riffing that he brought to early Anthrax. After his 15 year hiatus from music, in general, this is his return to music, in all forms. Some tracks exhibit a bit more potential than others, but when you haven't played guitar in that long a time, some stuff might sound a bit amateurish, but when the solos come in, they just rip your face off.
Musically, the sound of this EP is kind of like elements of Fear Factory, Korn, and a bit of Anthrax all jumbled together. A lot of the drumming in tracks like O.C.D. (Obsessive Compulsive Disorder) sound very simplistic and industrial tinged, while the guitar playing on the other hand are either simple chugging or more semi-prog-trash influenced. You won't find any virtuosic playing on here, more of these tracks focus on the songs as a whole as oppose to actual riffs.
The vocals on this album are really expressive, as well as impressive. A.O.H.'s vocals demonstrate immense versatility, ranging from the aforementioned Queensryche cleans to death metal growls and even a bit of Mike Patton-isms with some of the lines. Tracks like Dying Twice really have a lot of vocal acrobatics going on within a relatively short song.
Overall, this is a rather decent return for Spitz to music. This may not be what long time fans of Anthrax or Spitz may have wanted from this, but it does show potential to become much greater. Fans of industrial metal or modern sounding prog may want to look into this.
Overall Score: 6
Highlights: Anger Is Free, Head to The Floor
Posted by maskofgojira at 11:05 PM