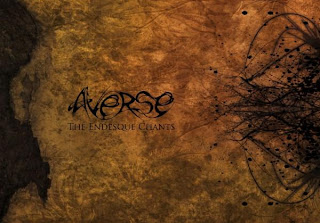 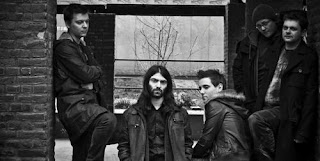 The 70's Always Did Have The Best Metal.

Averse is a French progressive black metal band. The band take influences from 70's progressive rock and avant-garde music along with more modern progressive metal bands. This is easily one of the more unique debuts this year.
While the sound on here is most definitely progressive black metal, like all bands with that tag, it does have a sound that is quite different from another band. Within the 5 members of the band is a violin player that is actually heard right from the start of this album. Another thing that is quite unique is the dynamic shifts that the band use within tracks.
This album contains only 6 songs, 3 of which are over 15 minutes long. These tracks really have an Opeth kind of structural styling, where they'll often shift from heavy and aggressive to mellow and jazzy. The 70's influence is very prevalent in every track, the band even hire session musicians to perform clarinet and harp on here. Songs have a lot of dynamics within them and manage to always keep you on your toes. Every track has at least one thing that is ear catching in some way and that proves to be very appealing to someone that can listen to progressive music, or someone that just likes to listen to various kinds of music.
The musicianship on here is just impeccable, from both the metal and the progressive sides. The metal side explore more areas of black, doom, and post-metal, usually focusing more of slower and mid-paced riffs, but occasionally they'll break out and go full on like the beginning of Fleetingness of Solar Happiness where the band just breaks into a very unusual black metal section. The prog side of the band is spectacular, ranging from almost singer-songwriter like folk on tracks like the pair I'm Not Scared of Music Anymore and Breathing Eyelids, really showing influences from artists like Tim Buckley and Nick Drake to prog rock on a track like the opener, Translating Your Name Into Numbers, which really brings to mind elements of King Crimson and Yes. As much as numerous influences are contained within here, the band never manage to sound like carbon copies of their influences.
The production on here really makes the music so much better, allowing everything to be heard. Little details emerge from beneath lustrous walls of sound, like near the end of the title-track, The Endesque Chants, subtle chiming sounds can be heard. The rich sound really makes this so much clearer and opens it up to allow for such details to be heard, which would otherwise be lost within the complexity of the music.
Overall, this is a fantastic record that anyone should definitely check out. Probably it's only flaw is that some of the tracks are a bit lengthy, but even that's a stretch, because if a track is good, the longer the better. Definitely one of the most unique debut albums I've heard, check these guys out for sure. This is highly recommended.
Overall Score: 9.5
Highlights: Every Song Is A Highlight

Posted by maskofgojira at 10:38 AM