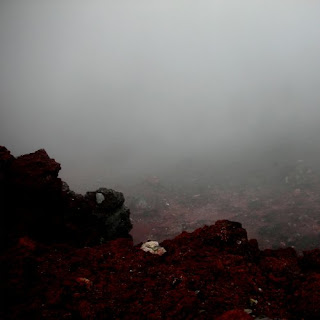 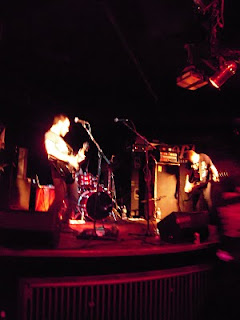 The Blistering Touch That Comes From Ashes.

Castevet is a black metal band trio from New York. This is the debut full-length release from a group that are more prominent in bands in the grindcore genre. This album was also produced by Collin Marston (Krallice, Behold... The Arctopus).
This is not just another straightforward black metal release, but that's fairly obvious considering who produced the record. This contains much more influence from thrash, punk, and death metal within it's darkened assault. The record is full of dynamics and soundscapes that would not be expected from what is considered a "black metal" release. Even within the opening track, Red Star Sans Chastity, there are plenty of atmospheric and melodic shifts that don't sound forced or even like it's out of place at all.
Having only a trio allows every member of the band to be heard on here, but once again this is also a thanks to Marston's production. The vocals are rougher than and a bit more death metal sounding than most black metal, but it still works very well with the sound achieved on this disc. The riffs played shift between progressive-punk influenced stuff, Stones, to more atmospheric clean work, hear the title-track, Mounds of Ash, which by the way is a great title. The rhythm section is always pounding away keeping things a bit more grounded and focused on keeping things together. The bass on here, by the way, wouldn't sound off in a sludge metal outfit, it retains a very distorted sound throughout and really is wonderfully played.
Musically, once again the whole punk mixed with atmospheric progressive black metal (that's a mouthful) is just fantastic. There is so much achieved on here it makes out debut albums look so boring in comparison. There is so much raw emotion and intensity that really shines through on this record, but this record is in no way under produced.
The songwriting on here is so dynamic and creative. Riffs stick around just long enough to get caught in your head before leaving, while the rhythm section is often playing the backdrop to the entire song, keeping everything in line. Tracks like the aforementioned Stones and the final track, Harvester, are just so crushingly heavy, but also so melodically catchy that it is a wonder that these guys are just now putting out a full-length with all the tallent shown here.
Overall, this is a great record and hopefully a start to a line of great records. Once again, Profound Lore Records has put out a fantastic release that just blows most other label's away in terms of consistency. If you're a fan of experimental black metal, these guys are right up your alley.
Overall Score: 9
Highlights: Red Star Sans Chastity, Stones, Harvester

Posted by maskofgojira at 8:12 AM