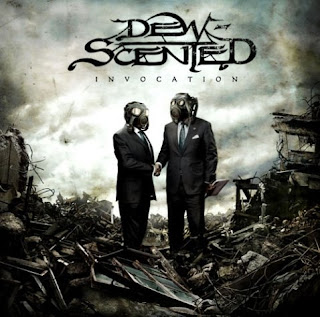 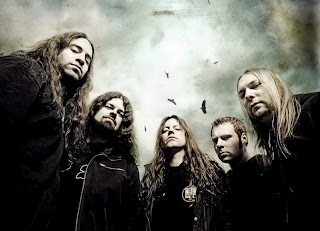 Do I Smell Schnitzel?

Dew-Scented is a German death/thrash outfit that has just released their 8th full-length album. This album isn't going to surprise any long time fans of the band, sticking to their tried and true formula for the album's duration. No real surprises are found on here, but chances are that if you're a long time fan, you're not going to be disappointed either.
After a short introduction track, Downfall, you will have a hammer dropped onto your ears as Arise From Decay begins. This song is a fairly typical track for the band, but they just sound so tight and together that it seems fresh. This feeling of togetherness, or tightness for those that don't get that last word being used here, sticks to the band like glue on this record, keeping things consistent and never sub-par.
Stylistically, this record contains all the trademark Dew-Scented traits, thrash riffs, melodic and fast guitar solos, death metal palm muting, and the occasional breakdown, that hasn't changed. The band mostly decide, like usual, to pound you in the face relentlessly, for the most part, for the 45 minutes that this album is. The few mellow down moment, the instrumentals to be precise, are where the band should focus their attention on maybe doing more with those parts than just leaving them to minute long excursions.
Long time fans of the band realize that the only original member left in the band is vocalist Leif Jensen, those who don't, now you know. But for what's actually relevant to this album, the vocals, which are no different from the last few releases by Dew-Scented. You're basically going to get a rough-and-tough sounding yell, somewhere between a death metal growl and a hardcore yell, think bands like Slayer and you'll get it.
Overall, this is really just another Dew-Scented release, nothing much has changed since their last one. If you're into bands like The Haunted, Hatebreed, and Biohazard, chances are you'll dig this as well. Just another notch in the death-thrash headboard of Dew-Scented.
Overall Score: 6.5
Highlights: Arise From Decay, Artificial Life, A Critical Mass
Posted by maskofgojira at 10:04 PM