Amestigon - Sun of All Suns 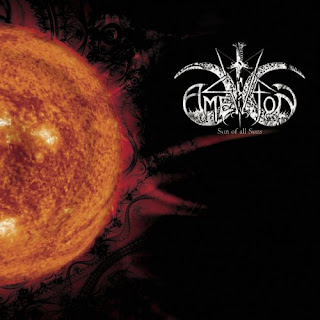 The Sound Of The Future Coming.

Amestigon is an ambient/industrial black metal band from Austria. This is their debut full-length after several splits, EPs, and demos since their original inception in 1993. This debut seems to really collect bits of their past work, as well as bits of the member's side projects together into a cacophony of black metal.
Over the band's 10 year plus existence, this is their first full-length due to numerous line-up problems over the years. Members left, then came back into the fold with newer takes on their presence with the group. Members include Lanz (Dominion III) on guitar and bass, Tharen (Dominion III, Dargaard, Abigor) on drums, vocals, and keyboards, Herr Wolf on guitars, and Silenius (Abigor, Summoning) on vocals. The presence of some of these projects can, as stated above, be heard within this album.
The sound on here is a unique take on a left-field approach towards more straightforward black metal, creating something that is a bit off. Musically, the sounds on here are black metal, but at some cases a bit slower than usual, Sun of All Suns, sometimes at a normal breakneck pace, Satanic Flesh. It's really the atmospheres that make this album sound a bit different, while atmosphere, for any fan of black metal this is common knowledge, is one of, if not the, most important thing in black metal, the atmosphere on here is not as mystic or open sounding. One could take this as an influence from the more industrial side of Dominion III and Abigor's more recent excursions due to the very, almost modern vibe from the ambiance.
The band also has quite a love for moving into more "progressive" routes on here as well. On a track like Daymares, Ketamine & Misanthropy, the band move into some mellow and more open moments where the music is able to breathe a bit more. Despite having tendencies into the more open territories, one wouldn't accidentally mistake these guys for having quite as much progressive tendencies as Enslaved, but this is more of a flirtation with the genre more than an overall embrace of it.
The production on here is also very well done. Throughout the entire album, the bass can always be heard and has a distinguishable voice within the overall sound numerous times. The guitars are rough and aggressive, but when they get more mellow and jazzy, hear That Which Is Falling..., things still maintain the same level of clearness. The vocals are loud, but not really at the very top of the mix, it sounds more like the guitars and vocals are about the same level.
Overall, this is a very good album that has a lot to offer any black metal fan. If you're a fan of any of the bands listed above, these guys are right up your alley. While they may not be the most noticed band around, these guys are doing something a bit different from your average black metal band by not fully embracing every influence, but allowing them to casually come into their sound. Check these guys out.
Overall Score: 8.5
Highlights: Daymares, Ketamine & Misanthropy, That Which Is Falling...

Posted by maskofgojira at 12:44 PM