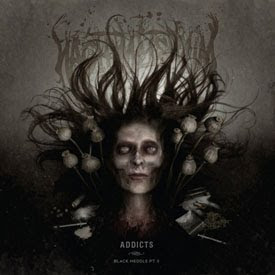 And To Think That Their Parent's Laughed At Their Record Collection.

Nachtmystium is a progressive black metal band from Illinois. This new record picks up from where their last one, "Assassins: Black Meddle I," left off. Utilizing more non-metal influences has only increased the originality and tastefulness in the band.
The brainchild of the last remaining original member, Blake Judd, this album takes even more influences from his past and forcibly mixes them together with the band's black metal roots. Besides Judd, other prominent members of the American black metal scene also come onto this record to help out, including Leviathan's Wrest on drums, Will Lindsay of Wolves In The Throne Room on bass, and Bruce Lamont of jazz-metal band Yakuza on guest vocals. The fact that Judd has enlisted some of his fellow musicians from bands that are all pushing the boundaries forward for their respective genre just shows how unique the material on this record actually is.
Judd has stated that this record not only takes the more progressive and psychedelic influenced sound of "Assassins" and pushes it further, but also takes influences from early gothic and industrial music as well, IE. Killing Joke and Ministry. These newer influences come out immediately after the first real track, High On Hate, ends and Nightfall begins. More danceable beats, simpler song structures, more distinguishable vocals, and an increase in keyboards all point to experimentalism and major progressions into foreign territory allows the band to use a sound that very few, if any, bands have ever grasped so fully.
Tracks like No Funeral and Blood Trance Fusion feature a lot more depth to them than anything in the band's earlier catalog ever demonstrated. Going head first into full-on industrial and gothic influences, tracks like these have only slight relations into the band's black metal past, sometimes the only link being Judd's scream. Other tracks feature more of an early 80's post-punk vibe to them like the title-track, Addicts, where more upbeat melodies and a dancable beat back up possibly one of the catchiest songs on the album.
The final track, Every Last Drop, features some of the most experimental tendencies on the record. Using acoustic guitars, Bruce Lamont's clean chants, and phasing synthes, everything that the band has cited as an influence on this record comes into play on this song, as well as a bit of the sound that "Assassins" used with slower and more sombre songs. This 8 minute closer really sums up Nachtmystium's experimental nature and tendencies in one long track. The hypnotic acoustic guitar melody that is played throughout the song is especially haunting and really sets the mood for the whole song, and the whaling guitar solos on here only add to the dark vibe of the track.
Overall, this is a record that any fan of experimental metal should check out. Taking elements that are becoming more and more present in black metal, and embracing them whole hearted to the point where the line is beginning to blur as to which has more predominance in Nachtmystium's sound. Progressive, melodic, tasteful, melancholic, catchy, this record is as close to a masterpiece as there ever was for 2010. Check this out.
Overall Score: 9.5
Highlights: Every Song Is A Highlight
Posted by maskofgojira at 1:35 PM