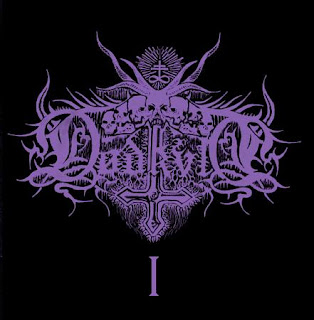 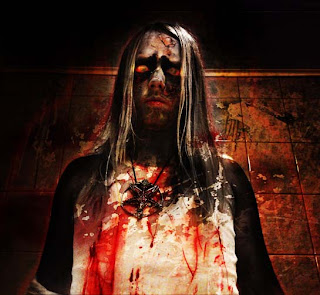 Willing To Experiment In Masochism.

Dødkvlt is an experimental project from Finland. Started last year by Lord Theynian, this is his very first release. Since this is an experimental project, you can expect to hear some out of the ordinary stuff on here, be ready.
Once this album starts, the oddness begins. Right from the opening seconds of Inn I Virvelen Av Brennende Sjaktene Av Skjærsilden you hear blast-beats, pounding double-bass, a rush of guitars, and an weird organ melody that sounds like it would be more appropriate in a carnival show than in a black metal song. The following track, Voldtar Engelen, seems to have a much more punk style of performance with faster and more traditional sounding black metal, but still nowhere near what the roots of the genre.
The riffs on here do channel a very primal form of black metal. At their core, no one could dispute this, but within tracks like Vakker Bortgang Av Menneskeheten or Mitt Epitaf traces of progressive metal, death metal, and avant-garde music can be found just within the guitar playing. This type of genre disregard is really what more music needs, for genres in general to be thrown out the window and just have a song that is impossible to really categorize.
Throughout the album, comparisons and parallels between Lord Theynian and Vaerohn (Pensées Nocturnes) can be seen. Both artists seem to make use of odd classical music and avant-garde jazz within their songs, granted, Vaerohn's songs are much longer than Lord Theynians, most of the songs on this album are under 5 minutes, they still are able to channel a very unique sound. One could take the simplistic route with both artists and simply label them as symphonic black metal and leave it at that, but they both manage to express so much more within their songs than simpler bands that use it to make their songs sound epic and grandiose, these tracks actually are both of those in the truest sense of the words.
Overall, this is a promising debut album that shows a lot of promise for what might come out in the future from Lord Theynian. Hopefully he'll continue down the path of avant-garde-ness and create some of the most original music in a while. If you're into avant-garde, progressive, experimental, symphonic, and all of the above thrown into your metal, black metal in this case, definitely check this out.
Overall Score: 8
Highlights: Uhellig Hær Stiger, The Rain

Posted by maskofgojira at 11:16 AM