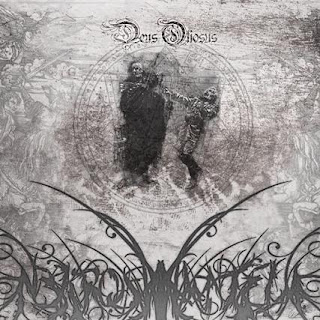 Nakros Manteia is a depressive/noisy black metal band from Australia. Little information is known about them other than that they formed in 2007 and that this is their first full-length album. The splits that preceded this record in 2008 and 2009 included work with Erebus Enthroned, Nekros Manteia, and Moon.
Opening with The Graveless Name, this album proves that it will not be defined by any such tag as depressive black metal alone. The swirl of bass that seems to just explode into your speakers within the opening seconds of the track alone is enough to make you wonder what you are indeed listening to in the first place. Within the first half of this track alone, you move from black metal through jazz, noise, and a bit of folk.
Don't let the paragraph above make you think that this is some sort of Dillinger Escape Plan/Mr. Bungle genre bending frenzy, cause it's not. This album moves from style to style very comfortably and at a pace that should be easy enough to handle for even the most casual listener. Shifting styles isn't so frantic that you'll have to go back and figure out how they did it.
Perhaps it is the album centerpiece, the 12 minute Gloom Perfidious that is the most obscure of anything on here in terms of it's genre bending and morphing. This track in particular takes more elements of noise, ambient, and harsh martial industrial music more so than metal, with vocals not even coming in till about 8 minutes in. This could be a hard track to stand just due to certain parts really being out of the ordinary, there are several times within the track where a clock begins ticking.
Probably the weirdest thing about this album is that within even the most avant-garde and out there moment of this album, it still contains a very cinematic vibe to it. Samples are used within a few tracks on here, but they are used in a way that, at least to me, felt very dark and disturbing, like someone is watching you in the dark or something. So many different feelings and atmospheres can pop out at a moments notice and seem to blindside you from the darkness that is actually there.
Surprisingly enough, the vocals on this album, if comparable at all, sound almost like Attila Csihar on the first Mayhem record. You'll hear everything from crazed blackened screams to throat scratching spoken word to raw, guttural death growls. Besides him, two guest vocalists from fellow Australian groups make appearances on this album. The first is from The Curator (Portal) on the epic Gloom Perfidious. The second vocalist is G.Kosmas (Be'Lakor) on Smothered In Spasms of Overcoming.
This is, overall, one of the strangest and most avant-garde sounding records I've heard all year. This thing is so fluid and controlled sounding, yet ready to go off the deep-end at almost any moment, which totally blows my mind. If you're into really avant-garde black metal that could make you re-evaluate your entire head space, check this out.
Overall Score: 8.5
Highlights: Monuments of Ash, Gloom Perfidious, Piercing Rapture Incessant

Posted by maskofgojira at 11:23 AM