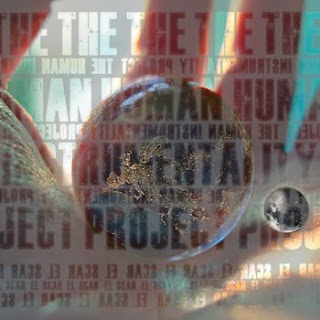 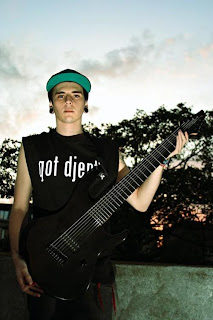 It Says Instrumentality, But It Has Vocals.

El Scar is a djent/tech metal project from the UK. Created by guitarist, composer, and main creator Marc Le Cras, this album was intended to be his major project for college, but he also made it available to the public as well. This is really another one of those djent bands popping up right now.
As soon as the intro, A Transfer, ends, A Human Work just pummels you with a heavy groove. The overall sound on here consists of extremely heavy, 8-string guitars pounding you with the main grooves while there may also be a clean guitar in the background adding a bit more ambiance to the track. It's almost a bit off-putting at times because the 8-string is just so heavy and down-tuned that the cleaner guitar really doesn't have the intended effect, I would presume, of giving the track a bit more depth and texture, sometimes just sounding like one really heavy guitar and one lighter clean guitar separate from each other.
Vocals were provided by Cras' ex-band mate, Jack Fletcher, and while there are vocals on most tracks, they are obviously not the main focal point of the sound. Fletcher's vocals aren't really what this project needs, often being just a hardcore-like yell or a lower growl more reminiscent of deathcore/metalcore; but occasionally you'll get some decent singing, hear Introjection, where it seems to benefit the track a bit more. For those that aren't a fan of the vocals, it's a lucky thing that the vocals aren't mixed all that high in the final mix, remaining behind the guitars for most tracks.
Probably the biggest problem, if you would call it that, is that several of the tracks on here feel very incomplete compared to others. When you listen to a track like A Hedgehog's Dilemma or Weaving A Story, they sound more like ideas rather than actual tracks/songs like The Beginning and The End or Tears. The feeling of completeness of this album is lacking with tracks like this on here, but the songs that are more full, are actually very promising.
Overall, this is an alright album, with several good ideas, some not as great and not really as developed. There is a lot of talent and potential here, lets hope Cras can create something even better next time. If you're a fan of artists like Meshuggah, Fear Factory, or the djent genre, check this out.
Overall Score: 7
Highlights: Ambivalence, The Beginning and The End, Rebirth

Here Is The Link Where You Can Download His Album For Free:
http://elscar.bandcamp.com/
Posted by maskofgojira at 10:09 AM