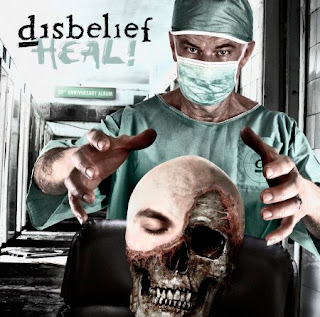 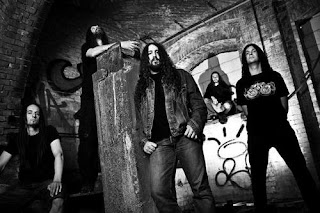 Disbelief is a death metal/sludge metal band from Germany. This is the groups ninth full-length release, and celebrates the band's 20th year of existence. This release seems to be dedicated to the 20 years and doesn't really hold a lot in store for new music, if you're a fan this is sort of a collector thing.
There are 8 tracks on this album, including 4 new songs, 3 covers, and a remake of an old song. The new songs have a groovy and old-school death metal vibe to them, like the band's older releases do. The cover songs have a bit more of an edge to them than the originals did, but stick to the original sounds, like cover songs really should. The remake is pretty much just an updated version of the title-track of the band's fourth album.
The original songs on here are all fairly consistent with the band's sound and are solid sounding. The band keep their old-school death metal sound with a sludgy feel for the most part, occasionally going into a bit of thrash in The Last Force - Attack!!, sometimes going a bit mellow and post-metal-ish in The Eyes of Horror. The band don't really explore their doom and sludge side fully until Certainty of Reality, which is also the best track on here, where they slow it down, but still keep a death metal vibe, think Asphyx.
The three covers include Killing Joke's Love Like Blood, Crimson Glory's Red Sharks, and King Diamond's Welcome Home. These covers are good and fun tracks that show some of the band's less metal, excluding King Diamond, influences. Just for those that might think this, the band have cover a Killing Joke song before, but this is a different one.
Overall, for what this actually is, it is a decent release that sums up the band's sound, some of their influences, and a piece of their older work all in one package. The songs are all decent, not bad, not great, but just there. Fans of the band this far will pick this up anyway, but for newer fans, this would be a good place to actually start.
Overall Score: 7
Highlights: Isolation, Certainty of Reality
Posted by maskofgojira at 6:40 PM