Gangrenator - Tales From A Thousand Graves 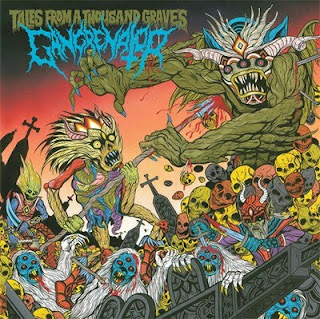 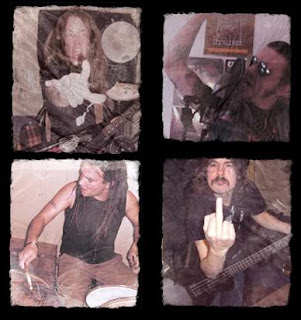 Not A Rob Zombie Tribute Band.

Gangrenator is a grindcore/death metal band from Norway. Featuring members from prominent black metal acts, this full-length takes the spirit of late 80s and early 90s death metal and revives it. Anyone that loves any sort of revival band, that is actually good anyway, should definitely check this out.
The quartet that made this release, as stated above, is made up of black metal alumni. On guitar is Berlevaag Lamseth (Endwarfment, Laserguys, B.S.R.), Prest (Laserguys, Thorns, Antidepressive Delivery)on bass, Salvatore Amore (Sexy Police, Manifest) on drums, and Mat "Kvohst" McMercenary(Dødheimsgard, Code)is on vocals. Taking influences from early death metal bands like Bolt Thrower, Carcass, and Napalm Death and do them justice by keeping this record short, dirty, and unfiltered gore lyrics.
Though influences from the early death metal scene are all present, the bands mentioned above, probably the one that sticks out the most is Carcass. Most of the songs on this album are under 2 minutes, only a handful being over that, and have a very similar style sound to "Symphonies of Sickness"-era Carcass. Kvohst's vocals especially contain a style that is reminiscent of Jeff Walker's growl, and you even get some of those more gurgling layers of vocals on a track like Taste The Skull.
Every instrument is heard clearly, for how raw this actually is it sounds good. The sheer fact that not only every instrument can be heard clear, but is also technically proficient as well makes this album almost bittersweet, since the 13 songs on here only add up to an album that is just under 25 minutes all together. But the song writing abilities that these short songs demonstrate is amazing, tracks like Carbonized Relatives and A Coffin Full of Hags are amazingly catchy.
Overall, this is an album that is going to be hard to beat, for any grindcore/death metal band this year. Brute force and aggression pound your ears for 25 minutes, but also give you plenty of parts to scream out to. Fans of old-school death metal, check this out.
Overall Score: 8.5
Highlights: Dr. Mangler, Plague Dolls, A Coffin Full of Hags
Posted by maskofgojira at 1:00 PM