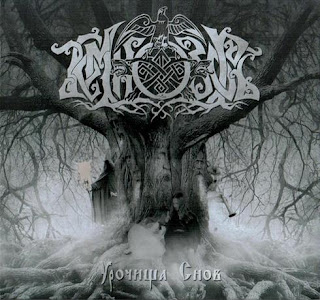 Temnozor is folk/black metal band from Russia. The group originally began in 1996 and have continued to expand since then, releasing 3 albums that have garnered them some success in foreign countries. This is their fourth full-length and it continues on their path of including more folk elements into their sound.
As soon as the spoken word/ambient folk intro of Вежды мора ends, Бусовы враны begins blasting you in the face. Tracks on here contain your traditional sounding melodic black metal but with the obvious inclusion of folk instruments, most notably the flute. Unlike what most are probably thinking, this does not lead the band into viking/pagan territory of gang chants and epic songs speaking the gods of war and viking heritage, but then again this band is from Russia, so it would be a bit pointless to go that route, nor does it lead them into the full-blown folk metal direction, with upbeat songs that include big choruses that speak of odd fairytale lands. If you took out all of the folk instruments on this album, you'd be left with that melodic black metal sound and some gruff sounding clean vocals.
Even within all of this easily definable and distinguishable sound, the band still manage to have certain traits in their music that can be traced to more unlikely sources. Солнцеврат-коляда is the most melodic track on the album, utilizing mostly clean vocals for most of the track as well as using riffs that would sound a bit more appropriate in a heavy metal song. The band even include a very unlikely ballads on the album, Урочища снов and Сердце журавлиных просторов, that are perfect mood setters, using acoustic guitars and clean chants while keyboards add light touches to the overall sound of the track.
Even more than the previous releases, the band seem to be increasing the use of clean vocals in their sound. Old time fans may not find this as pleasing as constant roars and screeches did on early albums, they are still here, but the cleans range from whispers to gang chants to almost soulful like bellows. Over time a band becomes increasingly aware of how to use each ability that they have been given and make use of it in certain ways, and it seems like the band is learning that the singers on here can make some very unique sounds and enhance their originality.
Overall, this is a record that surprised me, I did not anticipate liking this as much as I did and eventually found some tracks to become highly addictive. Very different sounding than other releases within the folk/black metal genre this year. If you're a fan of Bathory, or any band that decided to take their later work and develop it further, than you should definitely check this out.
Overall Score: 8
Highlights: Солнцеврат-коляда, Братина утра, Сердце журавлиных просторов

Posted by maskofgojira at 10:31 AM