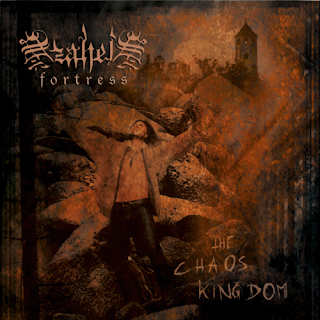 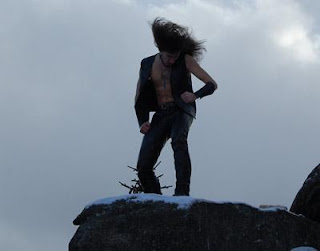 Take The Lead Young One.

Azahel's Fortress is a black metal project from Austria. This is their first release after the 2005 debut album "Secrets of The Forest." This album shows an improved sense of song-writing and crafting.
The music itself is very good, as mentioned above, shows a very good sense of song-writing and craft. Right when Slaves of The Throne begins, some influences or similarities can be drawn immediately. The riffs on here are very melodic, repetitive and catchy, and all that leads back to Satyricon, but there are some more dissonant and odd riffs that show a bit of Blut Aus Nord or Abigor styled experimentalism. There is also plenty of variety, tracks that are full bore blast-beating black metal, like The Pagan Sun, but you also have moments of mid-tempo stuff, Dark Forest Kingdom, that is just as good.
The vocals on here are very raw and have that classic sort of black metal vibe to them, where they sound almost on the verge of being rabid. The vocals, despite their old-school kind of approach, really fits the music, and is even distinguishable enough to be understood. This does wonders for this release, really making it so much more accessible than otherwise.
The bass on here is really well done, it can always be heard and it has a nice woody tone to it. There are several tracks where you can just hear a nice low thump from the bass. Unlike a lot of bands, the bass is actually worth listening to when it comes out, though there will never be a bass solo.
Overall, this is a very good release that shows a lot of potential for being a big hit, for black metal anyway. The songs on here feature a sort of technical version of modern day Satyricon. Definitely worth checking out if you're into catchy and melodic black metal with an edge of experimental nature in it.
Overall Score: 8
Highlights: Slave of The Throne, Dark Forest Kingdom, Behind A Mirror of Chaos

Posted by maskofgojira at 10:37 AM