Odem Arcarum - Outrageous Reverie Above The Erosion of Barren Earth 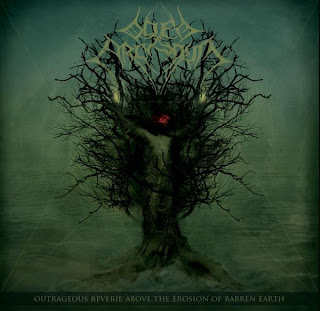 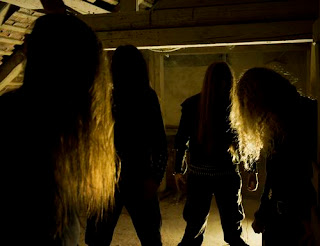 There Once Was A Band That Made An Epic Album With An Epic Title.

Odem Arcarum is a progressive black metal band from Germany. The band started back in 1995, but didn't release their debut full-length until 2003, 7 years later the band have finally released their sophomore record. This record is the first record to feature Ar on it as well.
For the entire line-up of the group that comprise Odem Arcarum right now you have C.A. (Seal) on drums, Zahak on bass, Skoarth (Lunar Aurora, Somber Serenity) on guitars, and Ar (Secrets of The Moon, Sael, Negura Bunget) on vocals, guitar, bass, and keys. With members of some of the most well respected and forward thinking black metal groups on this album, you can guarantee that this will not be a simple, traditional black metal record. The first record by this Odem Arcarum was just that, a fairly traditional sounding black metal record with elements that made them worth looking at, such as expressive and catchy song writing. Both continue on this record, but are much more than one might have expected, if you weren't aware of the line-up.
The production on here really is as close to perfect as one might expect for a black metal band. The sound is raw and allows for full-force aggression to be shown, but it is also lush and filled with texture, making allowing this record to seem much more 3 dimensional. Lush flourishes of keys flow through the background while occasionally rising up like waves, crashing over everything else, experience this near the end of Oceans.
The music itself is so much more progressive than one might have thought after listening to the debut from the band. The riffs are so much more dissonant, but also melodic, progressive and catchy, so much more than one might ask for in this case. While the main core of most of the riffs are still very black metal tremolo picked, it is much more expansive sounding, used in a lot of more atmospheric ways, hear Loss, or the beautiful melodies that soar through The Body & Perpetual Imagination. The bass on the other hand, is wonderfully played, always audible and at times even played melodically or jazzy.
Every track on here is like a journey, with songs ranging from just over 7 minutes to over 16 minutes in length. The epic of the album, the 16 minute Hell & Revelation, is the most captivating piece on this album, recalling elements of later period Emperor or Ihsahn's solo material. This track is absolutely breathtaking, despite it's length, it never once loses your attention, with enough going on to always keep you on your toes.
Overall, this is one of the most complete records of this year. Band can sometimes spend their entire career and never achieve this sort of dynamic and unique sound, and these guys have done it on their second record. If you're a fan of progressive or experimental music, or black metal, this is a must for this year.
Overall Score: 9.5
Highlights: Every Track Is A Highlight

Posted by maskofgojira at 8:39 AM