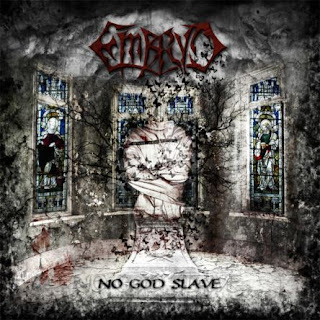 The Stairway To Heaven Was Not Found Here.

Embryo is a melodic death metal band from Italy. This is their sophomore effort, following up their 2006 debut record. The group has gone through a couple of member changes since that album, and now this record comes out with 3 new members.
Embryo is, as stated, a melodic death metal band, but they have a sound that's a bit more extreme than most bands in that genre tend to be. While this is no doubt a death metal, each instrument seems to call in something different, the keys really bring a symphonic edge that seem to carry most of the melody, the guitars, bass, and drums really have more of a groovy death metal style that occasionally goes a bit technical, and finally the vocals have a bit of a deathcore/brutal death metal style. The combination of all of these styles is a bit unorthodox, and it does take a bit of time to grow on you, but some might find this to be what makes this band stand out a bit more than others.
Lets start with the vocals first; as stated, the vocals sound a bit deathcore/brutal death metal-ish, compared with other bands put into the melo-death genre that is. This is due to the fact that the vocalist on here makes a lot more use of his lower range that some could associate with the deathcore genre, and sometimes even the brutal death one as well, almost every track has these lower growls. But don't let this fool you into thinking that he is a monotone vocalist, he also makes use of a higher scream that is more typical sounding of this genre.
Then the keys, once again, as stated, are used in a more symphonic vein. The use of more piano and orchestral ways is what really stands out among all these bands starting to incorporate electronic/trance into their music using keys, though some tracks do incorporate the typical lead synthe sounds. The keys are not the center of attention in the sound on this album though, on some tracks they are, hear the title-track, No God Slave, but on others, they are used more in the stereotypical way of providing atmosphere to tracks, One Way Left.
Despite the use of the term "deathcore," the music itself seems to show little to no influence from that genre of music. There are very few moments that could actually qualify the band into that genre, more relate to thrash, modern death metal, and even a bit of tech metal (aka Meshuggah). The guitar and bass manage to keep a good groove going, and when they decide to be a bit more technical, they end up being more melodic, hear The Scarecrow, while the drums follow along with an almost Fear Factory vibe, most clearly heard on Flatterer of Indifference.
This is, overall, a decent record that manages to stick out among the other melo-death albums this year. Not being the most original sounding in the book, but doing a fresh take on a older sound of the genre is where this album really ends up succeeding. If you're into the more melodic side of death metal, the real stuff, not the newer stuff, check this out.
Overall Score: 7.5
Highlights: One Way Left, Fear's Invention, Pain, Dark Passenger
Posted by maskofgojira at 6:39 PM