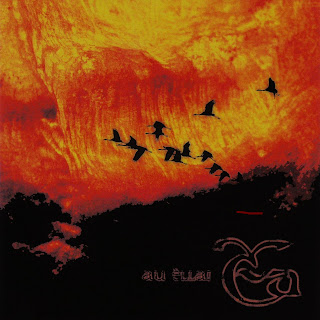 Ea is a funeral doom project from Russia. No members are known within the project, though the concept of this and the two record that preceded it are known. Focusing on ancient texts and civilizations and using dead languages within their music, this is no ordinary fd record.
Normally when you hear the term of funeral doom, you wouldn't be incorrect in assuming that this is the slowest thing out there next to drone and pure noise/ambient suites, but whether it's boring is really a matter of opinion. This record won't change your mind of the entire genre, but it safe to assume that this thing is probably a bit more entertaining than the average band playing their slowest to be cool. Things from the typical bag of tricks the genre has can be found on here, but there is a much more wider scope to the music on here then there seems to be a many other bands, but make no mistake this is still slow as can be, all 3 of the tracks on here top 10 minutes.
One thing that really seems to make this album, I have yet to hear their back catalog, so different is the use of obvious melodies. As soon as the first track, Aullu Eina, begins, the big guitar melody opens up and envelops you. Melody seems to play a very big part in this album, as it's not just droning chords that if you sped them up you could get a distinguishable line, they're clear from even the first listen. The use of guitar solos are also well used within here as well, which are not the most common thing in this genre.
Another thing that struck me with this album was the use of piano throughout the entire thing. Beautiful piano chords move seamlessly through tracks as an almost guiding force to the atmosphere, as more layers open up as a track moves forward. From what can be heard, most of the piano is actually used on this album, from the high and clearer sounding chords to even the low and bass ones, which is a nice contrast within just a single track.
Probably the biggest problem with this, and really the whole genre, is that the majority of bands aren't that memorable. Most things on this record are really great and cool sounding, but they really don't stick in your head that often; but, with that being said, this album has a greater chance of that than probably 90% of the other bands in the genre. There aren't a whole lot of specific parts that do get stuck, but every so often you might get a melody that you heard from this album popping up in your head.
Overall, this is one of the better funeral doom artists to come out in recent years. Making funeral doom into an original art statement, much in the same way groups like Esoteric, Thergothon, Skepticism, and Shape of Despair did. If you're into doom done slow but very melodically, check this out.
Overall Score: 8
Highlights: Nia Saeli A Taitalae