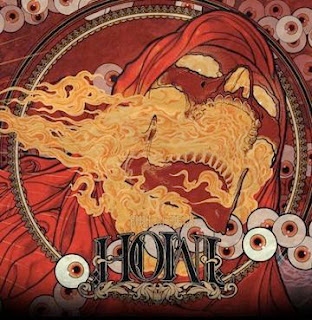 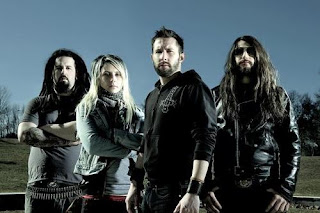 They're Full Of Something.

Howl is a sludge/stoner metal band from Rhode Island. The obvious comparisons to other groups in the same genre that also happen to be on Relapse Records as well are inevitable. These guys aren't so original that they're the newest thing, but these guys are doing what they're doing well.
Right from the get-go you get hit with a wall of distortion heavy guitars. Riffs reminisce of old Mastodon gallops intertwined with Baroness psychedelic grooves, a great combination indeed. The first 2 tracks, Horns of Steel and You Jackals Beware, are great, groovy tracks that will get any person's head bobbing. This is something you'll find throughout this record, the ability for this band to create strong and melodic song that doesn't seem to lean too much on any influence in particular.
This subject in particular is a matter of opinion, someone that listens to a lot more sludge/stoner rock and metal than I do would probably notice more obvious things within these songs, but from my perspective, not one influence really dominates another. The band are clearly still young and finding their own way, but this album does fine not letting too many influences outshine the band's own talent for writing great riffs. The harmonies within tracks like Heavenless are absolutely reminiscent of any of the band's mentioned above, but the band manage to not totally rip them off by constantly using it, making it readily available within solos more often than anywhere else. But, to me at least, the riffs that are used in this record are a lot more blues-tinged than Baroness' more classic rock experiments or Mastodon's progressive indulgences.
The bass, like all sludge really should, is loud and distinctive, really helping to create a low sound for the entire group. Finding that tracks like Jezebel are a bit more bass heavy, might surprise some, but it's heavy in terms of how it seems to switch between following the drums and following the guitars and seems to be a bit more entertaining than anything else on that track. This is not the case in many tracks, but there are some where the bass is just way too distinct and just draws you attention it's way.
Overall, I would go so far to say that this is the next big thing on Relapse, but it is a good record. Songs feature plenty of catchy hooks and is sure to please fans of the band's mentioned above, as well as other sludge/stoner band's on Relapse. This is pretty much a back-to-basics kind of sludge metal, gritty and Sabbath-y, but has enough of the modern influence to keep fans of the newer sludge interested as well. Worthy of checking out.
Overall Score: 8
Highlights: You Jackals Beware, Heavenless, The Scorpion's Last Sting
Posted by maskofgojira at 10:58 AM