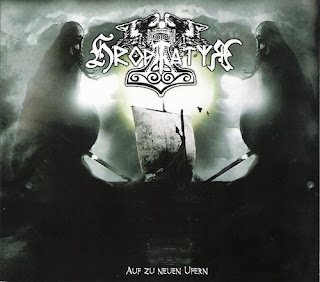 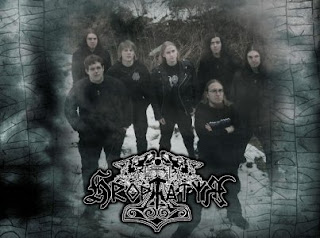 Sail Across The Seas Of Metal.

Hroptatyr are a viking metal band from Germany. This is their debut recording and demonstrates the very folky side of the genre. Fans of this style will once again have another band to check out.
The overall sound of this record could simply be described as a mix between Bathory, Iron Maiden, and Týr, very melodic and folky. You'll find big gang choruses with loads of instrumentation behind a driving metal melody. The melodies are really catchy and easy to digest in the context of being a viking metal album, listen to Aus Der Asche.
This, by the way, is also not the same sort of viking metal that one would say Amon Amarth is, this recalls a lot more of the folk side of the genre. The band really seem a lot better when they do focus on the folk side of their sound, the side that features lots of melody, big gang choruses, and varieties of instruments. The acoustic guitars in tracks like Die Zeit Der Goetter Und Der Mythen and really add so much more to the tracks, keeping them for falling into just another viking metal band that's all brawn.
The vocals are varied enough on this album to keep a listener entertained for a while. Berserker really focuses more on the gruff clean vocals and hardcore-ish yells while it's follow-up track Die Schlacht uses a higher range of black metal screams. The vocals do contain a lot of variation and are definitely a strong point for this band.
Despite having a knack for melody, there is still more than enough cheese to go around on here. The gang vocals chanting "Oh-oh-oh" on Frankensturm or the short and fast clean chorus on a track like Der Sieg Und Seine Fruechte really are a little too much. Viking metal can be good, but it can also be a little laughable at times, both can be found on here.
Overall, this is a decent record when taken for what it is. This has some great melodies and choruses, and the song writing is good, if nothing else, these guys can craft something that will stick with you. Fans of the genre are going to find this irresistible, check it out if you want something fun and not to heady.
Overall Score: 7
Highlights: Der Weg Eines Helden, Aus Der Asche
Posted by maskofgojira at 11:28 AM