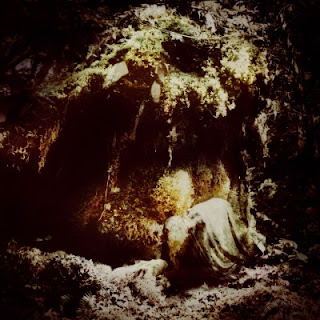 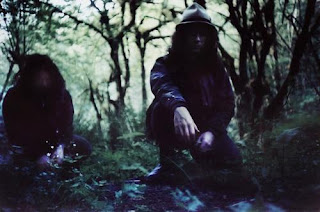 If I'm remembering correctly, it was 2007's "Two Hunters" album that turned me and many others on to the duo that was the core of WITTR. I know that there's been a lot of hate for them simply because they're the most widely accepted band to be termed "Cascadian Black Metal." Whether or not you totally buy into that idea of scene is really irrelevant, it's the music that matters more to me than an idea.
After remaining quiet for the last year or so, we got our first glimpse into what the Weaver brothers were up to. Revealing that their coming offering was their most complete and transcendental yet, as well as concluding the trilogy that started with "Two Hunters." They also mentioned that they were embracing their Popol Vuh influence even further on here as well, with more intricate and enveloping synthe textures. I was a little surprised when the band announced the track listing of the album because it was their first, besides the "Malevolent Grain" EP to divert from the four song per album format, excluding demos. Now, while I may have never been the biggest fan of the band, I have certainly always appreciated them and enjoyed their music when I've listened to it, but I can say with certainty that this is the album that I've been able to connect with the most.
Musically, this album contains songs that are a lot shorter than in the past, with the longest being opener Thuja Magus Imperium, which is just under twelve minutes (gasp!). That track in particular impressed me right away because of the almost new-age-ish middle section of the song and how melodic it was, in comparison to the band's past work of course. If longer song lengths have always been one of your main complaints with the band, tracks like Subterranean Imitation and Woodland Cathedral, both of which are under eight minutes, are probably the best places to start with the band to get an impression as to what you can expect from longer tracks. In my opinion, I think that the Popol Vuh influence, I hear a lot more from their new-age era stuff than krautrock, but that's just me, really enhanced this album because they really haven't done a whole lot on each album to make it all that different from the one before it, but this one sounds fresh and full of life.
By the end of it, I felt like I was hearing a band going through an evolution rather than another long-winded black metal album with atmospherics. While it's probably their best, in my opinion or course, I still think those that aren't fans of the band will most likely dislike this one as well. Check it out if you like black metal with some interesting atmospheres and influences coming from new age and krautrock.
Overall Score: 8.5
Highlights: Thuja Magus Imperium, Astral Blood, Prayer of Transformation
Posted by maskofgojira at 6:00 AM