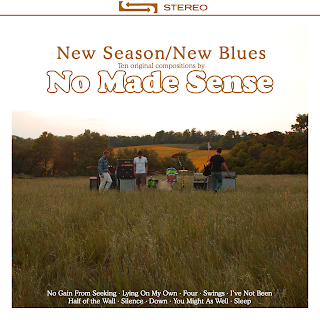 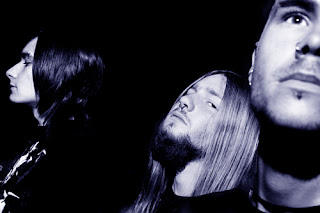 I, as I'm sure a lot of others, found No Made Sense through the blossoming, and yet withering, sub-genre of djent. Granted, this trio was certainly not as closely related to that genre as a lot of other groups, but they did make use of that Meshuggah influence. This new album sees the band taking a step back from a more complex concept, that was their debut, for more songwriting props.
I'll just say to clarify what I meant above, though these guys are lumped in with the whole "djent" scene, these guys have a lot more influences coming from bands like Isis, Neurosis, and Mastodon than from Meshuggah. The influences that come together on here bring the band into a more progressive-ish post-metal sort of sound, not to say you won't find a djenty riff here or there throughout this album though, Silence. But while I'm pretty impartial towards a lot of newer bands from that scene, djent I mean, I am more partial towards the first handful of artists that I found, some of whom haven't even released debuts yet, over newer projects/bands, but this band definitely showed me how much potential some of these bands have if given time to evolve. What I like about this though is how raw and unpolished this thing sounds, unlike most djenty bands who honestly have machine-quality, super polished albums, this is very minimal and unpolished, with it really sounding like the trio is just playing this stuff, for the most part anyway. The bass is also very audible in this mix, always being clear enough to be made out and providing more than just low-end rumble under the guitars, hear Lying On My Own for an example.
But I think the biggest improvement from their debut is the focus of more songs as oppose to an overlying concept. Shorter songs like Four or You Might As Well demonstrate a much more concise form of songwriting that really wasn't all that developed on their debut, but is much more impressive on here. I'll admit, shorter songs don't inspire very much in terms of progressive playing, as they are more straightforward and to the point, but they provide many more hooks. The vocals on here, maybe it's because I never listened all that closely to them on the debut, but on here, I was blown away by their diversity. Sure, you have the more crusty bellows that are typically associated with post-metal, but it was when the cleans that I had to double-take, a track like I've Not Been shows off some really high wails that definitely recall some almost post-hardcore vocalists, a little bit of Glassjaw's Daryl Palumbo came to mind.
I was really blown away with this album, I did not expect it to be as original and well written as it is. I'm sure a lot of people are going to disagree and hate what I'm going to say next but, in all honesty, watch out Mastodon, these guys might just surpass you if you don't keep an eye on them. Check this out if you like post-metal with a lot of diversity.
Overall Score: 8.5
Highlights: No Gain From Seeking, Silence, Sleep
Posted by maskofgojira at 7:53 AM