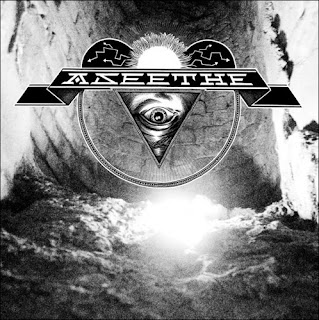 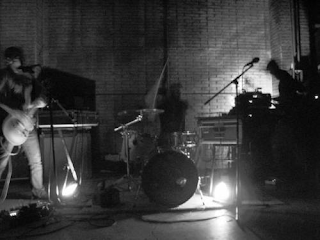 Aseethe is a new name for me, I actually hadn't heard of them before Drew, the bassist told me about them. After listening to a couple of songs from the splits they had done so far, I knew that I had to hear their new album. Apparently not even released on a label yet, which I'm sure will happen soon since listening to their material, I consider myself quite lucky to have heard this album.
Being a trio, these guys have a very, I don't know if I'd go so far as to call it distinct, but experimental view of doom and sludge metal. Heavy influences coming in from drone and ambient music practically transform this record into a completely different entity all together. Surrounded by a deeply haunting ambiance that just covers enough of the brooding instrumentation to clearly have a part in the sound while not engulfing the it. It's an interesting mix, though I'm quite sure that James Plotkin mastering this thing has more than a fare share of credit due as well. Now, I can't say that the instrumentation really differs all that much from the tried and true standards of doom and sludge metal, but it's rather the backdrop and soundscapes that breathe a much more haunting air into this recording. While sideA had a more persistent use of atmosphere throughout the entire track, you'll find that sideB builds drones and atmosphere as the track moves along, which was a nice surprise because I didn't really expect that the first time I listened to this thing.
In complete honesty, I feel like without these odd drones and ambiances and noises being used in conjunction with the slow-mo playing, this wouldn't be nearly as effective as it is. But that isn't to the fault of the musicianship or songwriting, cause both tracks on here are well written and constructed songs with some nice grooves that prove to be memorable enough to withstand criticism, it's more the style in general. The vocals, by both Drew and Brian, have a nice tone to them, it's a rough and raspy style of screaming that is used here and there throughout the both tracks. Personally, I would have liked to have heard these guys go further into drone territory, because the little nuggets of drone and feedback on here are good and interesting, and I feel like sideB was kind of interrupted because once the feedback started, the track ended, which was a little disappointing.
In the end I enjoyed this release, it's a good and solid slab of doom metal, hints of sludge here and there, that's well worth looking into. While I did enjoy the first half of the album more simply because of the heavier atmosphere, sideB was certainly not a let down. Definitely check this album, and band out for a great helping of experimental doom.
Overall Score: 8
Highlights: SideA (Reverent)
Posted by maskofgojira at 7:23 AM