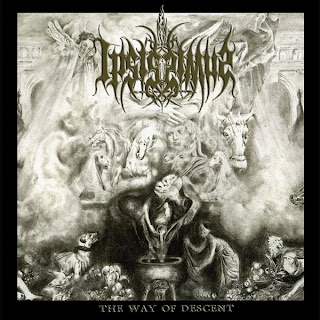 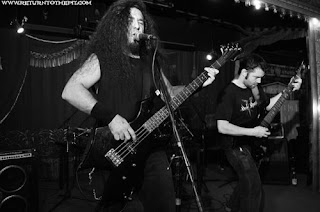 Metal Blade Records, despite being one of the priogenetors of signing some of the biggest metal/deathcore acts in the last decade, have been signing some somewhat surprising bands as of late. It seems like they've been picking out a few black metal bands within the last few years, and not bad ones at that. This album is the debut of this trio, I don't have huge expectations, but I'm hoping that this is good.
I know that being a trio doesn't always lend itself to having the most full sounding sound, it can often feel like something's missing, or at least to me that's how it feels sometimes, and this album has that happening throughout it. I don't know if I'd go so far to call it a drawback or anything bad, it's just like something is missing. When the band are going full-bore, more traditional melodic black metal oriented, it sounds fine, but it's really when the guitar is trying to do more "progressive" things that it feels like there's nothing really connecting the guitar to what's happening with the drums and bass.
I feel like what these guys are doing in terms of a sound is well done and well executed with all of the above still holding true. This is melodic black metal with hints of more progressive elements thrown into the riffs here and there throughout, but what makes this better than perhaps a lot of other groups doing a similar style is that these guys hold true to the fact that having a good riff in a song is still important even when you're blasting, Monakhourgia/The Prince of Tyre for instance. While I'm not sure what the intention for it was, I can respect the use of more ambient sounds throughout the album, hear The Alchemist's Goatthrone, because it is different. I can also appreciate the use of, at least what appears to be, a concept running through the album with three tracks linking together as far as titles go.
I thought this was a pretty decent release, it's not great, still far from being an original band, but what's on here is good and they have ideas. I'm glad to see that while these guys aren't the most unique band, they might evolve into something a little different in the future, and they have a pretty big label backing them. If you like melodic black metal, or even death metal to an extent, check this out.
Overall Score: 7.5
Highlights: Monakhourgia/The Prince of Tyre, The Third Secret of Fatima
Posted by maskofgojira at 8:30 AM