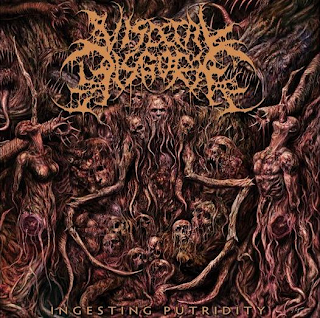 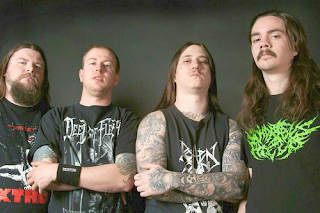 I haven't reviewed a whole lot of brutal death metal this year, so I figure I'll throw the genre a bone and check this out. I've never been a huge fan of the bands that come from this style, but I think it's always nice to just check out one of these bands having no knowledge about them and listen to it. I'm hopeful that this is interesting.
As soon as this thing began, I felt a sense of anguish wash over me. One of the things that keeps me away from this sub-genre of death metal are the vocals, the pig-squeals, the gurgles, the disgusting growls, I'm a guy who likes to have an idea as to what a vocalist is saying, not to say there aren't exceptions, but this is not one of them. I'm also completely fine with the gore, torture, misogyny topics that are covered in a majority of bands like this, but for once I'd like to see something else covered in the genre, but I won't hold that against these guys as it's just my feelings about it in general.
Musically, I was actually quite surprised by this one, it plays itself off as this brutal slam death style, but is really much more than that. Sure, brutal slam death is a good chunk of their sound, but there's also quite of bit of technical playing and melody in here as well that sticks out. I'm also a fan of how these guys do not abuse the low-end of an album, it's used just enough to not be obnoxious about it in this sort of context. I can also appreciate that this thing is not blasting all the time, it is fairly straightforward and grooving, not really going out too far into unknown territory, but at least it moves beyond blasting for the majority of a song and crawls when a slam comes, Spastic Anal Lacerations for example. Now I have to mention that for all it's positives in musicianship, the songwriting is a bit lackluster as well, as most of these songs are pretty standard for the genre, Strangled and Sodomized and Ball-Gagged and Gutted, while other songs just fail to stick with me despite doing something a bit different.
It's a decent album, nothing spectacular or original, but it is better than a lot of other groups that I've heard come from this sub-genre. This still has it's problems and it's still not my favorite style, but I'm sure it will please others. If you like the whole slam and brutal death metal thing and are will to hear more melody and technical playing here and there, then by all means check this out.
Overall Score: 7
Highlights: Sedated and Amputated, Colostomy Bag Asphyxiation, Maggot Infested Fuck Hole
Posted by maskofgojira at 8:14 AM