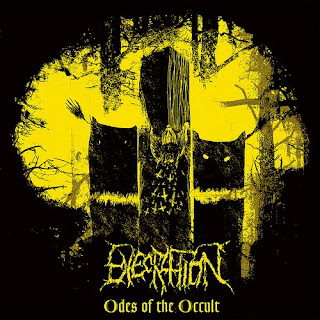 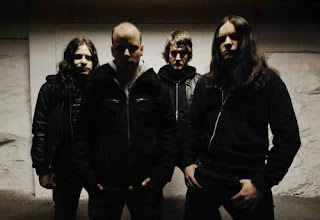 My first encounter with Execration was with last year's "In Oslo We Rot" split with Lobotomized, Diskord, and Obliteration. The track they contributed was easily the best on there and got me interested in the band. I'm a little surprised to already have a new full-length, but I'm glad for it.
The influence from bands like Immolation and Suffocation can still be heard throughout this record, but it's clear that black metal has started to seep into the equation as well. I also have to say I was surprised that before listening to this, I saw the tag of progressive metal being attached to this, and while I was doubtful, I was surprised as to how true it actually was. This album has a lot of different dynamics and changes throughout, even within the course of a single song, hear Unction. Despite all of this, there's still a very old-school death metal core, like the aforementioned groups above, this is not super produced, it doesn't sound really layered, it sounds like a band playing really weird death metal songs. I especially love how the vocals are done in that old-school Pestilence or Autopsy style of vomitous shout.
In terms of progressive though, I feel the need to say that it isn't in the same vein as groups like Opeth or groups like Death, it's more like throwing a big bag of different death metal bands into a blender and the result it this. Little bits of Autopsy, Immolation, Incantation, and stuff like that, but also hints of stuff like early Darkthrone, early Katatonia or My Dying Bride, and a bit of Edge of Sanity thrown in as well make for a very potent combination that I personally really enjoy. There are bits that are doomy, parts that are more straightforward, sections that are a lot more technical, and sections that are just just more brutal and grinding, a little bit of everything, but it all works. Tracks like Soul Maggot, Obsession, and Left In Scorn are great places to really get a feel for what these guys are doing, but A Crutch For Consolation takes the cake for being the most all-encompassing track on here, with a little bit of everything in it's ten and a half minute length. In addition to the variation within the songs, these songs are also very memorable and, on certain tracks, catchy.
This is one of the best death metal albums I've heard all year, definitely an album I'm spinning a lot. I'm sure there are some who won't like it because it isn't super polished or "br00tal," but this is real death metal with personality and balls. I highly recommend this to anyone that likes death metal at all, definitely check this out.
Overall Score: 9.5
Highlights: Every Track Is A Highlight
Posted by maskofgojira at 8:18 AM