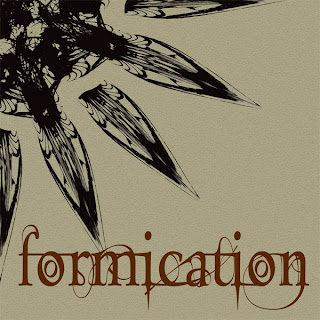 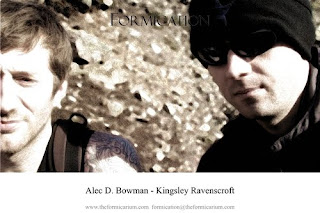 When I got this album, I knew nothing about the band or what they sounded like, but it looked interesting. I don't really look into the whole industrial scene all that often, thus, I don't really know a lot about it, but I do enjoy neo-classical music, both of which I've seen attached to this duo. With all that being said, I had to approach this with an open mind.
Like I just mentioned above, I'm not all that big into industrial music, I know very little about it actually, so what I'm hearing on here might be totally unoriginal in the grand scheme of things, but what I heard was really weird and different. Unlike the groups and projects that I had heard before, this was much more minimal, abstract, and dark. Lots of drones, weird noises, synthetic and manipulated voices are common throughout the disc, and thus made for a very surreal soundscape. The addition of noise as the album progresses actually adds to the odd abstraction that this album creates.
In all honesty though, and this is totally a personal problem, I just couldn't get into the sound of the album, it felt so one-dimensional to me. I was like looking at a brick wall, I just couldn't see around or through it and so it was like no matter what changes occurred, nothing really felt different. I Had A Plastic Head That Melted for example just felt so tiring to listen to, it wasn't boring, but it was just hard to get through. Granted, this whole album isn't taxing, but with only a few tracks really feeling like they go places, this album just wore on me very quickly. While I know that there will be others who will enjoy this album more than I did, I should say that this is a difficult album, and one that even after several listens, didn't really grow on me all that much, unfortunately. I found this album worked best when I used it as background music, but that's just me.
So, by the end of this I was exhausted, which is a shame because like I said it's a cool album, I just couldn't get into it. Pretty much every problem I have with it is just something I could see other people not minding all that much. If you like experimental industrial music, I still recommend checking this out.
Overall Score: 5
Highlights: Solus Air and The Dream of The Heart Star, The Chase to Jacob's Ladder At Easter, Silver
Posted by maskofgojira at 11:40 AM