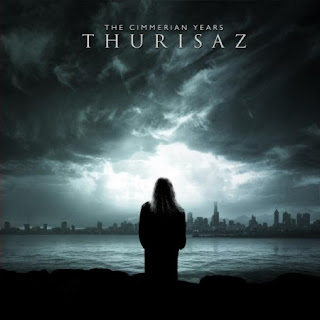 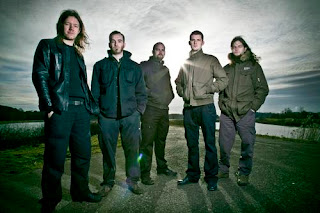 Thurisaz is a band I feel lucky enough to have found quite a few years ago when I was first getting into black metal. I've pretty much been following them since 2007's "Circadian Rhythm" was released. It's been four years since then, and I've been awaiting this album since I started hearing rumors about it a year or so ago.
From what I've heard from others as well as by judging the guests on the album, the band appear to be making a move into doomier territory on this record. Unlike their debut which was pretty inspired melodic black metal or their last album which really demonstrated a lot more progressive tendencies, this new one takes those sounds and slows them down. This is still melodic, there are still moments of more progressive playing, and there's still an almost gothic atmosphere on here. You can find all those elements in here, black, doom, gothic, and death metal as well as inclinations made towards progressive rock and brethren artists like Opeth, November's Doom, who's very own vocalist, Paul Kuhr, guests on No Regrets, and Katatonia, Unhealed even recalls moments of their more recent output. But what really makes these guys stand out is their atmosphere, it's something that hearkens a bit to symphonic metal and classical music, but it's not nearly as cheesy or synthe heavy as some groups make it, and instead use it to back up the guitars and as more of an atmosphere texture.
In all honesty, I think the production on here is just stellar. It's clean, but it's not overly polished, it's clear, but still allows for the grit of the guitars to come through. It also allows for a lot of the different atmospheres and keyboards to really shine through without overwhelming the rest of the instruments. I also enjoy, in general here, if an album has a consistent thread, whether it be an atmosphere, vocal or lyrical idea, melody, or whatever, and I found that with this album there was a nice texture of ambiance that just reclaimed what's so good about the gothic-doom for me. There are a lot of groups doing the whole gothic and doom metal style, some are better than others, but I found on this album what many are lacking, in my opinion at least, an atmosphere that just brings a chill and icy vibe to the entire album. In addition to all of that, the songwriting is just well done on here, it's not perfect, but it certainly is leagues ahead of a lot of other bands doing, or attempting to do, this sort of style, hear tracks like Second Mirror or The Carnival of Miscreation.
By the end of this album, it really feels like I just went through a journey, and that's how an album should make a listener feel, in all honesty. Like the bands I mentioned above, these guys know how to craft good, melodic songs that are both unique sounding, catchy, and can make a complete sounding album. Great stuff, check it out if you like melodic, progressive-ish metal.
Overall Score: 9
Highlights: Fare Thee Well, Unhealed, A Glance of Misperception
Posted by maskofgojira at 8:06 AM