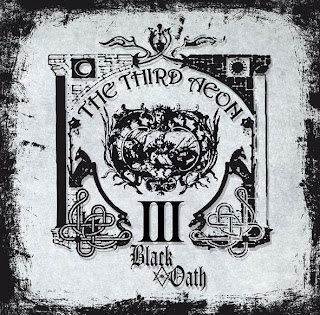 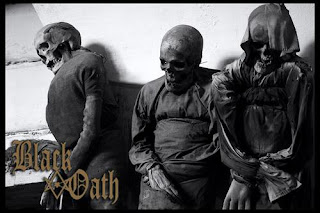 I am a big fan of doom metal, as well as obvious other genres and sub-genres of metal but that's beside the point. It's fine with all these sub-genre bands popping up, but it's great to hear a band that can pull off the old-school sound well. Black Oath is one of those groups, though I didn't know that until after I had listened to the album.
If you're looking for a fix of some modern doom metal in the vein of Black Sabbath, Pentagram, Black Widow, or Candlemass, this is where you should look. Bluesy guitar licks, slow-going drums, a good woody sounding bass, and a nice clear vocal that just soars over the rest of it. This is the stuff that makes metal music fun to reminisce about, the good ol' days when bands knew how to write songs and riffs and not just play fast and technical. A lot of these riffs also have that very triumphant feel to them, though I wouldn't put them in the same category as the whole Manowar true metal thing, this is real. In a way though, this is just another band in the whole traditional heavy metal revival, if you think about it, even if they are better songwriters than a lot of other bands. I couldn't help but throw that in, sorry if I've offended anyone with that last comment.
I love how on a track like Growth of A Star Within, the bass just pops out of the mix and just feels as important as the guitar is. It really feels like the bass isn't just something that needs to be there, but belongs there, it has a role in the band besides playing along with the drums. The use of organ on some of these songs is also great, it really has that rich tone that made it so great in the early days, hear Evil Sorcerer. The Black Oath also brings the epic nature that made lengthier tracks back in the day so great, it wasn't just seeing how long you could make a song, but about what makes up that song, justifying it's length.
If you're an old-school heavy metal fan, I don't see any reason why you should look into this album. It really has everything you could love about those early doom metal bands, but with a modern production. Definitely look into it if you like heavy and doom metal.
Overall Score: 8
Highlights: Evil Sorcerer, The Black Oath
Posted by maskofgojira at 8:59 AM