A Death Cinematic - Your Fate Twisting, Epic In Its Crushing Moments EP (2011) 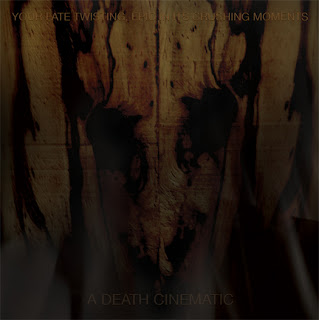 A Death Cinematic is a project that I've been meaning to check out for several months now, but haven't really gotten around to it. Luckily enough, I got an email with this new EP from the man himself which gave me the opportunity to finally check it out. Being composed of mainly guitar, I'm interested in what types of sounds are created through this, as well as various other works.
This three song EP brings something I didn't really expect to the table. What I expected to hear were sounds more akin to that of post-rock and ambient music, but what's on here is not only much darker, but much more droney. The title-track, Your Fate Twisting, Epic In Its Crushing Moments, is an epic twenty-two minute piece that kind of circles around a basic idea for it's entire length with some subtle changes occurring throughout. It's decent, I like the idea for it, but I found that it was a bit too long for my personal taste, and some of the notes came off as being a bit too harsh, or distorted, for my own personal taste and kind of just ruined the atmosphere for me. By comparison, I felt that In The Tumbling Dawn Light, Their Eyes Fall Frozen Through The Mist and Rain made much more effective use of it's time with more atmospheric elements proved to be a much better and enjoyable piece.
This three song EP proved to be a much different experience than I thought it would be, but it didn't really convince me of anything. I can safely say that I enjoyed only about half of this, with the interlude being pretty inconsequential for the most part. Check it out if you like drone music, but I'd say go for the full-lengths first.
Overall Score: 6
Highlights: In The Tumbling Dawn Light, Their Eyes Fall Frozen Through The Mist and Rain
Posted by maskofgojira at 10:42 AM