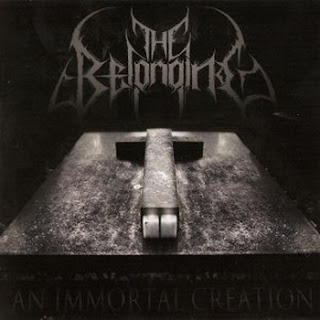 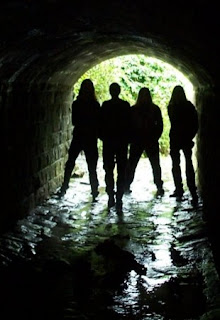 Every once in a while I'll find an album cover that just catches my eye, even if I don't think it all that great an album cover. When I saw this cover, just the bleak nature, and anti-religious, nature of the cover caught my eye. I'm not even that big on melodic death/black metal, but why not give this a shot.
I'm not sure how I feel about an album beginning with the cocking of a gun and then blasting forward. I'm sure I've mentioned in the past my distaste for bands like Dark Funeral, which means little on here because these guys are by no means as intense or brutal as that band is, but the reason I bring it up is in how the songs are presented. On here, songs are melodic, some a bit more technical than others, but they all wind up sounding the same, which is how I feel about Dark Funeral. Clearly, I found this band much more entertaining and more varied than that band, but there was just something about it, maybe the production, that made me feel a connection between both bands. Sonically, I actually hear more Rotting Christ in here than Dark Funeral, but whatever, this is just a problem I have.
In all honesty, though the above sounded negative, I do applaud this record in several departments, and I have to say that it isn't a bad record. The guitar playing on here is well done, I mean, for the most part it is based in typical black metal riffing with some more death and thrash elements coming in now and then, but it's well done. Excluding genre names, it's quite varied from song to song, with opener Archangel being a straightforward blasting song, but then there are songs like Slave which is much more progressive, going into an album Akercocke moment near it's ending, or Procreation of A Demigod which has a much more death metal vibe to it. Also, like I mentioned above, these guys aren't afraid to be a bit more technical at times, hear Militant, which is quite refreshing to hear in a black metal context since it's a lot more common in death metal than black metal.
So it's not a bad album, it's actually quite good, despite the genre itself not really being my thing, for what it's worth. I'm sure people who are into more melodic black metal will enjoy this a lot more than I did, because compared to a lot of other groups in the genre, that I've listened to mind you, these guys are actually pretty diverse. Check it out if you're into more melodic black metal with influences coming in from other extreme metal.
Overall Score: 7
Highlights: Militant, Slave, An Immortal Creation
Posted by maskofgojira at 11:57 AM