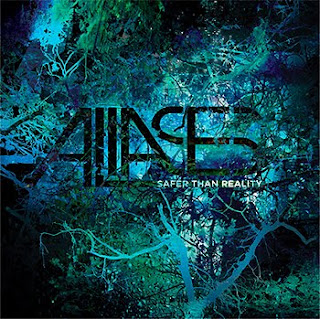 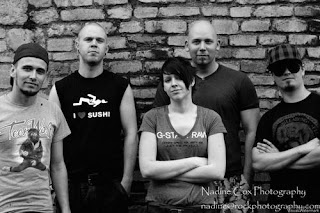 Though a relatively new act, Aliases has gained a lot of hype due to being the new band of former tech-metal masters Sikth, Graham ‘Pin’ Pinney. There's been a lot anticipation for this release since the first track was released. Surprisingly, the reactions have been a little more middle of the road than I anticipated, so I naturally became even more interested in this than I probably would have been otherwise.
Now, as soon as We Never Should Have Met was released to the internet about a year or so ago, there's been a huge clamor over this band, being the band to really carry on the legacy of Sikth. So does this little album live up to the hype, to all the excitement and anticipation? For the most part, if you're a Sikth fan, you shouldn't be disappointed with this, but I found it to be lacking in a few areas. This is pretty much Sikth-lite to me, it's much less quirky, both musically and vocally, though the latter was to be expected, which is kind of a let down; but don't get me wrong, when I say quirky, don't mistake me for meaning not technical, not performed at frantic paces, and not well played, because it's all that, but it just doesn't have the same air of oddity that his Pinney's previous band had. Tracks like What's Left For Us? and Sirens don't really do anything all that different from what Sikth was doing at their most straightforward, but it rarely moves into the same same sense of just mind-bending riffery that Sikth was able to. I have to commend the rhythm section on here for definitely standing out and bringing a lot of character to these songs though.
I am aware that the Sikth comparisons are numerous in this review and that this is a different band, but I feel like this is a pretty safe release, as nothing is really quite as out of the box as I would have liked it to be. Make no mistake, I liked this album, I just felt that it was a bit generic and a bit rushed. Check it out if you like technical metal or a more progressive take on metalcore.
Overall Score: 7
Highlights: The Reality of Beliefs, All That Glitters Is Gold
Posted by maskofgojira at 10:48 AM